Are Carrie Underwood and Mike Fisher having marital problems? Contrary to a recent report that Underwood has to save her marriage to Fisher, the two couldn't be any happier.

From a terrible fall that left the singer with stitches on her face and Fisher returning to hockey, rumors began spreading that the couple was ultimately headed for splitsville. According to a source, this story is completely untrue as they two are sticking through thick and thin.

"She wants the world to know that she and Mike are stronger than ever. They've certainly had their ups and downs, like everyone, but divorce was never an option for Carrie. She says hard work, faith, and commitment to family saved her marriage," a source close to the couple stated.

This isn't the first time the couple became the subject of divorce rumors. Back in 2015, Underwood opened up about some of the difficulties that the two had faced in their marriage after their son Isaiah was born.

The singer stated that every marriage goes through ups and downs after a baby comes along but couples must make an effort to "not lose each other" even though their time is preoccupied with a newborn.

The couple is also reportedly trying to have another child soon so their son Isaiah, who is now 3 years old, can have a sibling.

The only deer I am OK with @mfisher1212 "catching!" @catchindeers #HelpMe #happyhalloween #veganwifeproblems A post shared by  Carrie Underwood (@carrieunderwood) on Oct 31, 2017 at 3:52pm PDT

In November 2017, the publicist of the "Jesus Take The Wheel" singer announced that Underwood had a nasty fall in her home and was hospitalized.

The 34-year-old suffered multiple injuries and broke her wrist. Because of the incident, Underwood had to cancel several appearances, including her induction into the Oklahoma Hall of Fame.

Reports later revealed that the singer had to get 40 to 50 stitches on her face due to the fall. The former American Idol winner opened up about the insecurities she faced after receiving the stitches and posted several pictures on her social media page, where she still covered her face.

When in 5 degree weather, wrap your @caliabycarrie scarf around your neck and face...you keep warm AND look like an awesome winter snow ninja! #WinWin #StayThePath #LetItSnow #BabyItsColdOutside ️ ️ A post shared by  Carrie Underwood (@carrieunderwood) on Dec 27, 2017 at 12:30pm PST

Underwood and Fisher have been married since 2010 after dating for two years. 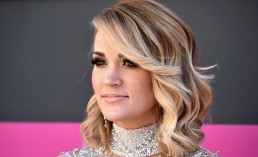 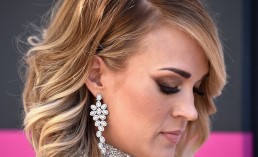 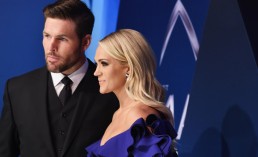