Carrie Underwood has shared a new photo on Instagram that has fans hopeful that the singer is becoming more comfortable following her tragic fall in the late November.

Since the incident, the singer has not shown much of her face due to the fact that she needs stitches. Underwood first teased her fans with a side view of herself in a recording studio earlier this week. Now the singer showed herself while on rehearsal with her band, which has many speculating that the singer will be performing at this year's American Country Music Awards.

Missed these guys. #bandrehearsals A post shared by Carrie Underwood (@carrieunderwood) on Apr 6, 2018 at 8:04am PDT

In the photo, Underwood is seen in casual attire, with her hair in a neat bun.

The singer revealed earlier this month that she had some "surprises" for her fans related to the picture she just posted, which could possibly mean new music or a surprise performance.

In November 2017, Underwood had to pull out of several performances, including her induction to the Oklahoma Hall Of Fame, due to her fall down a flight of stairs in her home. Reportedly, the "Think Before He Cheats" singer had to receive 40 to 50 stitches on her face and also broke her wrist.

Since then, Underwood was hardly seen in public and had rarely shown her entire face in any of her social media photos.

The singer also reportedly admitted to having "nightmares" of her tragic fall and was also suffering from "self-esteem" issues because of the stitches on her face.

"When I am ready to get in front of the camera, I want you all to understand why I might look a bit different. I'm hoping that by then, the differences are minimal, but again, I just don't know how it's all going to end up," Underwood stated. The singer's marriage to NHL player Mike Fisher was also under media scrutiny due to rumors of the two "heading" for divorce.

The country singer has one son with Fisher, Isaiah, who was born in 2015. 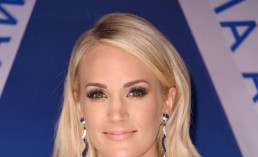 Carrie Underwood Unveils Half Of Her Face After Accident, Reveals She's Back In The Studio 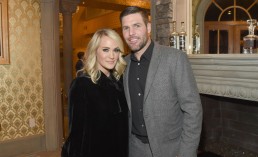