Khloe Kardashian finally revealed her baby girl's name. The Keeping Up With the Kardashians star took to Instagram to let her fans know that she decided to name her daughter True Thompson.

The first-time mom disclosed the news with a photo of a room completely decked out with the color pink. The space appears to be a shot of a living room as it features a pink chair and tons of pink balloons and pink flowers.

"Our little girl, True Thompson, has completely stolen our hearts and we overwhelmed with LOVE. Such a blessing to welcome this angel into the family! Mommy and Daddy looooooove you True," Kardashian captioned the photo.

Our little girl, True Thompson, has completely stolen our hearts and we are overwhelmed with LOVE. Such a blessing to welcome this angel into the family! Mommy and Daddy loooooove you True! A post shared by  Khloé (@khloekardashian) on Apr 16, 2018 at 12:15pm PDT

The Good American designer gave birth to her first child on Thursday, April 12, just days after several videos surfaced that suggested her baby daddy, Tristan Thompson, was being unfaithful. While in New York City for a basketball game, the Cleveland Cavaliers player was spotted at a nightclub with Instagram model and strip club bartender Lani Blair. The two were later caught heading into Thompson's hotel and then leaving out together hours later.

Following the NBA star's night with Blair, several other women have come forward and TMZ even released a surveillance video of the athlete in which he sits next to two women. In the video, Thompson is making out with one woman and then motorboats the other. Neither Kardashian nor Thompson has spoken out about the rumors or videos, but the reality star's family has reportedly been trying to keep her in good spirits.

Thompson may have cheated on the denim designer but it looks like that didn't stop Kardashian from opting for a "T" name. While appearing on the Ellen DeGeneres Show back in January, Kardashian claimed that she was still undecided but was considering going for a "K or a "T" name for her baby.

"If it's a boy, I'll go with Junior...Tristan Jr. For a girl, I don't even know where to begin. I think I want a K or a T," the Revenge Body host told DeGeneres. 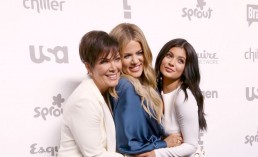 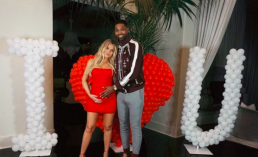