Jeffrey Dean Morgan just wants to live a normal life. The actor and his wife Hilarie Burton are requesting fans to respect their privacy.

It's Not A Solid Plan

The 52-year-old Walking Dead star took to Twitter on Tuesday to vent his frustration at strangers turning up in their family home uninvited. Apparently, it's an ongoing issue and he and Burton have had enough.

"Dear people that think it's a solid plan to come to our house, take pictures, drive up to house, knock on door... it's not a good plan. It's rude and creepy. Respect our privacy please. And... you're being recorded," he wrote.

The 36-year-old One Tree Hill star was quick to retweet her hubby, adding her own message to fans who think it's a good idea to just show up unannounced at their house.

"Nothing makes me angrier," she added.

Of course, other people had a very different response to the couple's request, including Sons of Anarchy star Ryan Hurst, who replied to joke about being held in their basement.

"Look. I'm sorry. Now please let me out of the basement! I won't do it again!" he joked.

Elsewhere, a fan hilariously posted a gif of Morgan's beloved Walking Dead character Negan, reacting to meeting Father Gabriel for the first time, but re-purposed it to apply to the situation.

A Long Road To Conception

The A-list couple has been happily married since 2014. They have two children, 8-year-old son Gus and 4-month-old daughter George.

Following George's birth, Burton opened up about their five-year struggle to get pregnant again. They initially conceived after a year and a half of trying, but it ended in a miscarriage soon after Burton told Morgan the happy news.

Burton admitted to being jealous of every other pregnant celebrity, but the two thankfully managed to conceive George later. The couple's daughter was born in February of this year.

The Walking Dead returns for its ninth season this fall. Its sister show, Fear the Walking Dead, airs Sundays at 9 p.m. The second half of the show's fourth season kicks off August 12. Both shows expect massive panels at the upcoming San Diego Comic-Con. 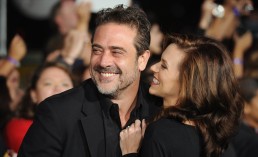 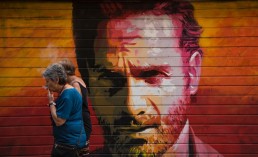 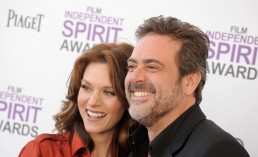