Rappers Cardi B and Offset have become proud parents of a healthy baby girl. The couple welcomes their little bundle of joy to the world.

25-year-old Cardi B, whose real name is Belcalis Almanzar, and husband Offset of rap group Migos, welcomed their first child together Tuesday, July 10.

The new mom took to Instagram to make the announcement the following day, alongside a classy shot of her in a nude maternity photoshoot.

The birth of baby Kulture comes just a couple weeks after Cardi B confirmed that she married her 26-year-old man in secret last September.

"Well now since you lil [nosy] f-s know at least ya can stop saying I had a baby out of wedlock," tweeted the characteristically candid star.

She only confirmed she was pregnant on Saturday Night Live back in April, following months of speculation and some strategically planned outfits.

The rapper debuted her baby bump in a stunning, custom-made, white Christian Siriano dress during a performance of "Be Careful," off her world-conquering debut album, Invasion of Privacy.

The following month, she told host Howard Stern that the baby is a girl during an appearance on his radio show. Cardi hinted that the baby is female while being interviewed at the Met Gala also. The rapper slipped in a reference to a "she" while chatting with the press.

As for that all-important name, the "Bodak Yellow" hitmaker confirmed on an appearance on The Ellen DeGeneres Show that Offset had come up with the perfect moniker for their little lady.

Cardi also joked that the sexy moves she pulled during her Coachella performance were her way of letting everyone know how she got pregnant in the first place. She also let The Breakfast Club show know in April that the baby was conceived during one particularly good night.

Never One To Hold Back

During a wide-ranging interview, Cardi admitted she hates how people assume her career is over as a result of her having a child.

"It just really bothers me and it disgusts me because I see a lot of women online like, 'Oh I feel sorry for you, oh your career is over.' As a woman, why can't I have both? Why do I gotta choose a career or a baby? ... I want both," she argued.

Never the one to hold her tongue, the star also clapped back at fans criticizing Offset for smoking near her, after footage emerged online.

"SINCE YA CARE AND ARE SO CONCERN about my baby ... Hit me in my DM for my registry and send me some [Pampers] and baby formula. Don't just comment like you care about my baby show it!! SEND THEM PAMPERS!" she quipped.

She later suggested fans might want to split her medical bills with her if they're so concerned about the health of her then-unborn child.

The proud new parents got engaged last October onstage after dating since February. It's now known that the proposal actually happened weeks after getting secretly married at their shared home. The two celebrated their upcoming baby with a lavish baby shower on June 26 in Atlanta.

Cardi promised in a recent Rolling Stone profile that she plans to be completely open with her daughter about her rise from stripper to rap superstar. 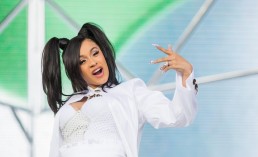 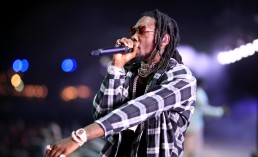 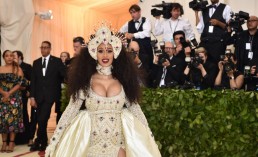