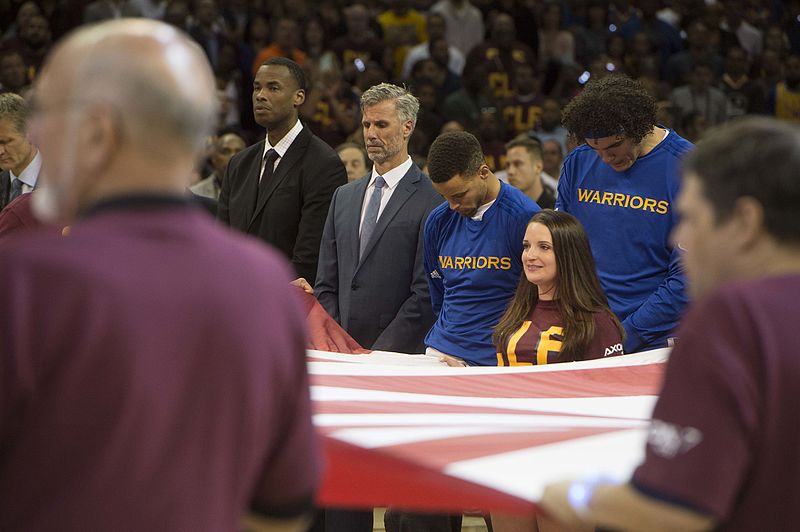 The Sunday Service is a weekly gospel concert led by the master rapper himself, Kanye West. It has attracted a lot of celebrities, including Katy Perry, Idris Elba and Brad Pitt.

The "Jesus Is King" artist wants to make faith mainstream like pop culture. To call Kanye West a genius is, in fact, an understatement. With his weekly Sunday Service, this artist is once again testing the boundaries of his talent and his faith.

Last Sunday, Kanye welcomed another hotshot celebrity in his Church Service. This time, it is basketball superstar Stephen Curry.

Curry Sings With The Crowd

The Golden State Warriors star was seen in Kanye West's church service this past weekend. He was seated at the front row at the City of Refuge church in Gardena. Swizz Beatz and La La Anthony were also in attendance to this service.

The basketball superstar was one with the singer artist, Kanye West, in their desire to speak of how God changed their life for the better.

"My faith in court is tested as much as it is tested in real life," Stephen Curry said previously. On his show on Facebook, he also mentioned that he believed that the losses and disappointments are all part of a great plan.

The basketball superstar claimed that it is his faith that he held on to when he needed to determine what he needs to do for his family, for his job, as well as what he could do for other people.

The athlete also said that he has a special kind of appreciation for life because of his faith. He has always been a religious person. In fact, in his youth, he started attending the Central Church of God in Charlotte, N.C.

At the Sunday Service with Kanye West, Steph Curry can be seen in his best element, singing his faith with the crowd.

At a young age, Stephen Curry found himself tied to religion. In eight grade, he joined the youth service led by "Pastor Jason." He was the pastor who emphasized that children need to find their own faith because they simply could not live off what their parents believe in.

Curry recalled that the pastor told them that faith is something that one needs to discover for himself. "Believing in a decision you need to make for yourself," the basketball star added.

Then, the time came when he felt the "calling." He walked to the altar and offered his life to Christ. That was the beginning of his personal journey with God and his faith.

In fact, before every game, Steph would write the words, "I can do all things..." on his shoes. Steph also mentioned in his FB video why he chose the verse from Philippians 4:13 to write. He opened that it was his mom that challenged him to find a verse in the bible that will give him a sense of purpose.

Steph said that his mom asked him for a verse that will remind him of who he was playing for every time he would lace up his sneakers and go into court.

Steph Curry is indeed one faithful man. In all the things that he does, he puts God at the center. He remains focused on the game and improving his family simply because he leads the life of a faithful.