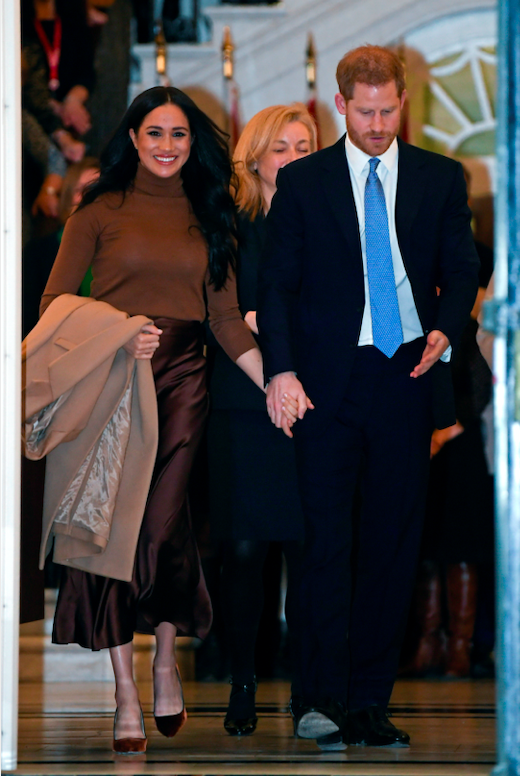 Following the announcement that they will be stepping back as members of the British royal family, Prince Harry and Meghan Markle reportedly wants to make Los Angeles their new home, but only after the presidency of Donald Trump ends.

A source told the Daily Mail: "It's by no means an immediate thing, but there is a long-term plan to end up back in the US with a second home in Canada, where they will also spend a great deal of time."

The source added that the Duke and Duchess of Sussex used the words "North America" in their statement because that's where they plan to live eventually; however, it does not pin them down in one place.

Friends of the couple told the publication that while they will be living in Canada at first, their main aim is to have a home and business in Los Angeles.

Their ultimate plan is to base their home, charitable endeavors and other business dealings in the U.S., possibly in Los Angeles.

The former "Suits" actress grew up in Los Angeles with her mother, Doria Ragland, who currently lives there. Doria was recently seen walking her two dogs near her home last week right after the Sussexes' announcement that they would be splitting their time in the U.K. and North America.

Markle has been openly critical of Trump in the past, even calling him "misogynistic" and "divisive" in 2016. She also threatened to move to Canada if he defeated Hilary Clinton during the 2016 Elections.

Markle said at the time that she was considering remaining in Toronto where she filmed "Suits" if Trump won.

Markle was also on maternity leave during Trump's visit in the U.K. and could not make it. But according to a report by Politico, after news broke that she would miss his visit, Trump was asked by a Sun reporter during a pre-trip Oval Office interview in June if he knew Markle was critical of him during his campaign.

"I didn't know that, no. I hope she's okay," Trump responded.

Trump was then asked about Markle's comments and fired back, saying that he did not know that she was "nasty."

"A lot of people moving here, so what can I say? No, I didn't know that she was nasty," the current POTUS added.

Trump later clarified that he meant the comments made by Markle were nasty.

Markle's concerns about returning to a Trump-led America also has something to do with his racist comments. During her time in the U.K., the biracial Duchess has faced racist online abuse and media coverage.

The absence of the U.S. government in the Sandringham discussion does not mean the couple would not end up setting in America one day. But if they moved there, that would presumably involve making arrangements with U.S. authorities.

Right now, a Trump-led government might not be inclined to welcome her, Prince Harry, and their son Archie warmly or to use taxpayers money to help cover their security costs.

It has also been reported that Canadian Prime Minister already assured Queen Elizabeth II that his country would contribute in the security bill for the Duke and Duchess of Sussex's protection while they stay there.