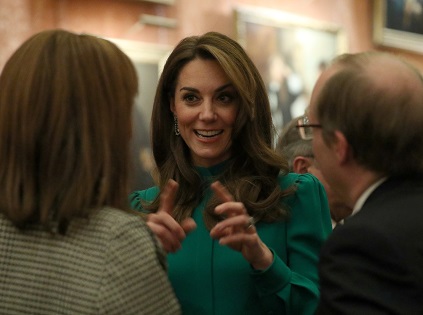 When someone has been in a relationship for a long time, people tend to ask when they are settling down. When they finally get married, people will start looking for a baby. When the first-born arrives, people will inquire about giving the baby a sibling. And when there is finally a sibling, people will ask for more.

The norm of asking lovers with the next big thing in their life can also be tiring on the couple's part, and sometimes, they just need to shut them down even for once.

Royal couple Prince William and Kate Middleton is no exemption to this norm, even after having six-year-old Prince George, four-year-old Princess Charlotte, and turning two-year-old Prince Louis on their family. People kept asking if they would want to add another child to their growing family and wondering if they will have it soon.

On Wednesday, during the Duke and Duchess of Cambridge's visit at the Bradford City Hall in West Yorkshire England, the 38-year-old Kate once again addressed the possibility of having a baby number four even if it has only been two years since she last gave birth.

While chatting with a royal fan named Josh Macpalce, who congratulated the Duchess for her three children, Kate revealed that she would unlikely become a mother of four anytime soon.

But instead of simply shutting down the idea, Kate casually passes the ball to her 37-year-old husband.

It is not the first time that the Duchess addressed the idea of giving Prince George, Princess Charlotte and Prince Louis a baby brother or sister.

During the royal couple's visit to Northern Ireland in February of last year, Kate admitted feeling a little "broody" after meeting a five-month-old baby James Barr.

Kate could not resist gushing over the little boy and even told the baby's father: "He's gorgeous. It makes me feel broody."

The baby's father then casually asked: "Baby number four?" To which Kate laughed and replied: "I think William would be a little worried."

The Duke and Duchess of Cambridge's visit to Bradford City is their first joint appearance since the controversial announcement of Prince Harry and Meghan Markle of stepping down as senior members of the royal family.

Despite the shocking plot twist that rocked the Buckingham Palace, the future king and queen were all smiles while greeting the crowd outside the city hall. However, an expert said the couple's body language says otherwise.

Speaking to Cosmopolitan, body language expert Blanca Cobb said that Kate and William are evidently touching their stomach more often than before, which could mean that they are feeling nervous and unsettled about something.

Cobb also compared how the couple's shoulder appears from their previous engagements and said: "It's unusual to see William and Kate with such rounded shoulders. It could be that they're figuratively feeling the weight or pressure of the situation with Harry and Meghan, so it's weighing them down a bit."

READ MORE: Burger King Trolls Prince Harry by Offering Him a Job To 'Keep The Crown'