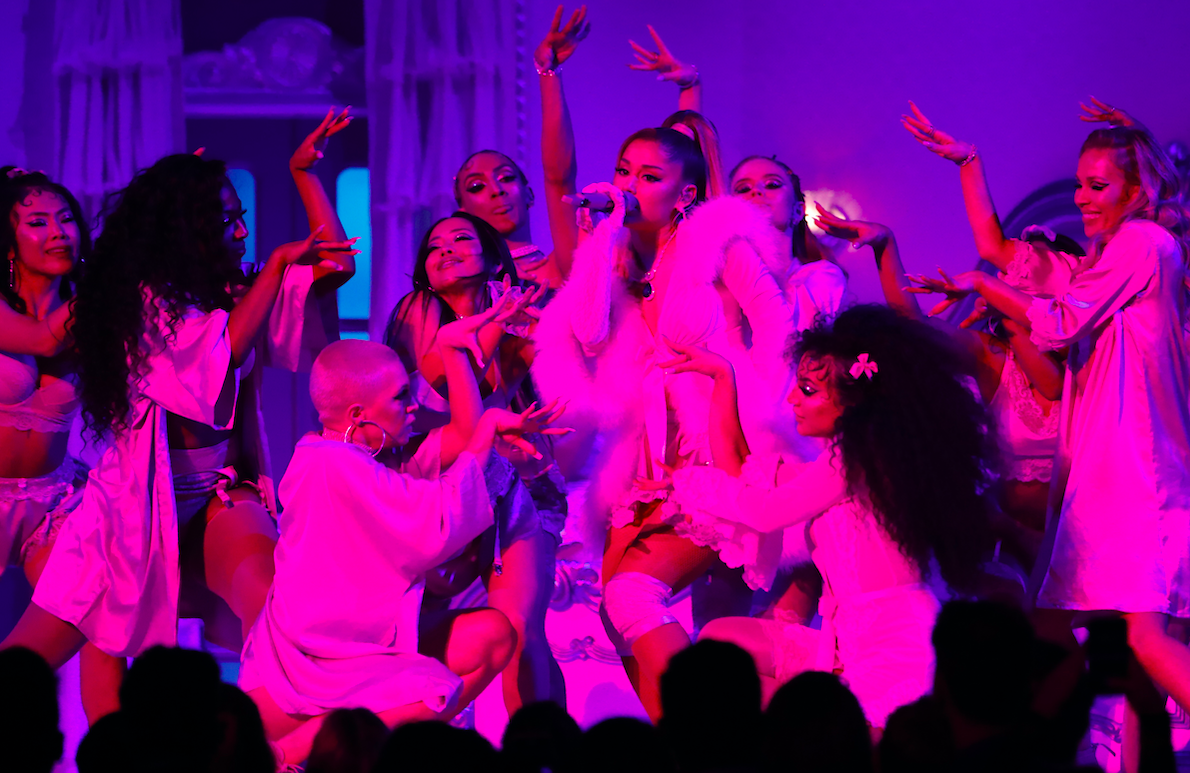 It is the end of another era for Ariana Grande.

The pop star performed a medley of her famous songs, "Imagine," "7 Rings," and "Thank U, Next" at the 62nd Grammy Awards on Sunday night. The killer performance had two sets and an impressive and dramatic costume change.

For Ari's first performance, she wore a flowing gray ball gown with a purple moon background on stage. She started singing, "Imagine." She then used "My Favorite Things" as a transition interlude, where the singer also had to rip off her skirt.

Ariana then moved into a bedroom stage-set for a sultry "7 Rings" performance.  She closed her performance with an emotional rendition of "Thank U, Next."

However, one thing left fans surprised.

As Ariana's performance ended, she crawled into the bed, took off her engagement ring and put it back in its box.

Was this a symbol of the 26-year-old singer closing the book on that specific part of her life? Fans seem to think so.

Twitter user @emaleek18 said, "She took off her engagement ring while singing her diss track to her ex's. An absolute queen."

Another tweet by @RadioTheJules said, "Did @ArianaGrande just diss Pete Davidson at the end of her performance with that ring box?"

Fans were adamant that the former "Victorious" actress threw shade at her ex Pete Davidson, finally closing that chapter in her life for good.

Ariana and Pete got together a month after her split from ex-boyfriend Mac Miller in May 2018.

In 2018, they called off their engagement, with Ariana ending her whirlwind relationship with the "Saturday Night Live" comedian.

Soon after, "Thank U, Next" was released. And there was no doubt that Pete was a big inspiration for the album.

In the lyrics, Ariana even called out Pete, directly singing, "Even almost got married, and to Pete, I'm so thankful."

In a 2019 interview with Vogue Magazine, the singer-actress confessed that she did not know Pete that well before they even got engaged, which was only a few months into their relationship.

"It was frivolous and fun and insane and highly unrealistic, and I loved him, and I didn't know him."

However, other fans thought that she was closing her "Thank U, Next" era and not making shade to an ex.

"Her putting back the ring back in the box showing it's the end of an era," says @SAYLIVE.

@yuhnotes said, "You guys need to understand that at the end of the performance Ariana putting the ring back in the box references towards the era officially ending. No more tun or sweetener. It's in the past, and now we wait for 2021."

It was not only Ariana's performance that became a big talk at the Grammy's.  She also had the best reaction to one fellow singer who said Ari deserved "Album of the Year."

Billie Eilish swept most of the Grammy awards this year, but during her acceptance speech, she did not think she deserved to win.

"I think 'Thank U, Next' deserves 'Album of the Year' like more than anything in the world. I love you so much."

And then the camera panned to Ariana, where she waved off the notion entirely and blew Eilish a kiss.