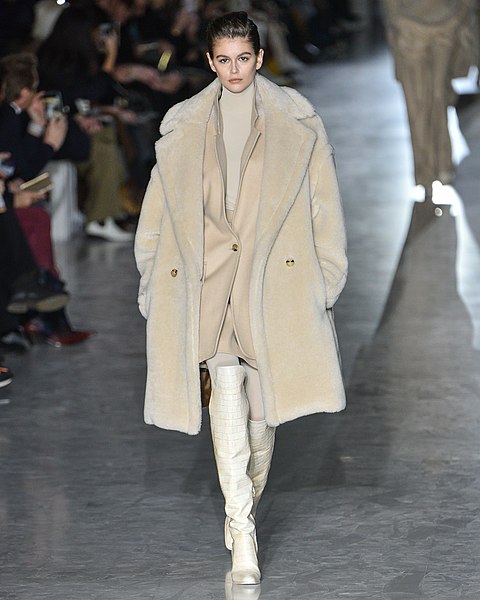 Kaia Gerber has just made the internet go crazy.

On Wednesday, the 18-year-old model posted a photo of herself holding a pint of ice cream on one hand and a book on the other. In the picture posted on her Instagram stories, Kaia's face was covered with an open copy of the parenting book by Spencer Johnson called "The One Minute Mother."

The actress was wearing a pair of black leggings, a gray sports bra and a white jacket. In the photo, Gerber also stuck her tummy out. In the caption, she wrote, "Read into this."

View this post on Instagram
such an honor to collaborate with @sandrachoiofficial on this @jimmychoo collection that benefits a cause so close to my heart @stjude making it that much sweeterA post shared by Kaia (@kaiagerber) on Jan 24, 2020 at 12:28am PST

The post garnered plenty of reaction, with some fans thinking that Kaia is suggesting she is pregnant.

The young model is the daughter of Randy Gerber and supermodel Cindy Crawford. She shared this rather confusing photo weeks after she allegedly ended her relationship with comedian Pete Davidson.

Kaia and Pete were first linked together back in October. They were spotted out and about several times looking very sweet to each other every time.

According to the report released by E! News, Davidson is currently on a break to focus on improving his mental health. After the announcement he made in Saturday Night Live, Davidson has not been seen with Gerber.

In an interview after his rather indirect announcement about submitting himself to rehabilitation, Davidson said that he would not be surprised if Gerber would not want to be with him anymore.

Pete Davidson and Kaia Gerber are spending some time apart. Although the two have yet to confirm their split, they have not been seen together in the past few weeks. The 26-year old SNL star has a borderline personality disorder and has first sought treatment in 2016.

It was only in December of 2019 when the comedian first addressed his romance with Gerber.

"It's not fair Colin. You date famous women and everyone is delighted, but when I do, the world wants to punch me on the throat," Davidson joked, referring to Colin Jost, a co-anchor for the "Weekend Update." Colin is the fiancee of the "Black Widow" actress Scarlett Johansson.

Davidson has been linked to several other famous women, including Ariana Grande to whom he was previously engaged. Davidson also dated Kate Beckinsale that made the headlines because of their unrestricted PDA.

The comedian surprised everyone when he started talking about getting into rehab for help during one of the episodes of "SNL." They wondered how Kaia Gerber would react to the announcement, but she hasn't said a word about it.

E! News previously reported that Kaia was having second thoughts about dating Pete. An insider close to Gerber revealed that she cares for Pete and wants him to get better, but the insider noted that the 18-year-old model is putting their future together "up in the air."

Gerber has seen Pete at his most vulnerable, and it scared her.

A different source told PEOPLE that Davidson totally "understands" how Gerber feels. They are trying to keep the friendship despite not ending up together. However, Kaia's recent post on Instagram seems to be saying something else.

Is she pregnant with Davidson's child? Representatives for both Gerber and Davidson have yet to comment on the situation at hand.