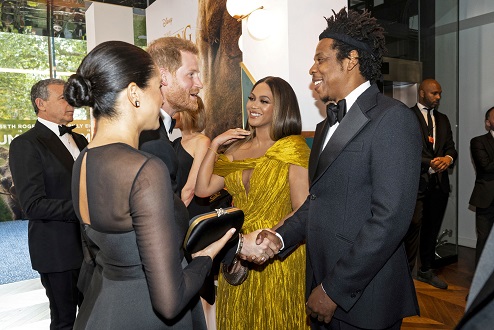 Prince Harry was spotted with Disney CEO Bob Iger at last year's premiere of "The Lion King" in London. Critics of the Duke and Duchess of Sussex say that the prince cozying up to the business exec could only mean one thing -- Meghan Markle will be available for voiceover work in the future.

However, this act of Prince Harry has gotten the royals to cringe at the thought. Is he really selling his wife to the highest bidder? An expert claimed that the Queen herself was left wondering why her family was trying to sell themselves so badly.

Working For The Future

Earlier this year, a video re-surfaced showing Prince Harry and Meghan Markle talking about the many potential opportunities they may have in the future. In the video, the Duke of Sussex can be heard telling the CEO from Disney, "Next time you need a voiceover work, we can make ourselves available."

"Anything like that. Just not Scar. That's a no to Scar," the prince added.

Despite having his back on the camera, Jon Favreau can be seen smiling at Meghan Markle when the Duchess said, "That's really why we are here, to pitch."

Now, in an interview with 60 Minutes Australia, talent manager and royal expert Jonathan Shalit quipped that he is certain members of the royal family are not happy with what happened during the said event in London.

"I'm sure the senior members of the royal family who have seen this wished it hadn't happened," Shalit said. However, the critic also remarked that such things really do happen whether one is royal or not.

Sometimes, parents wish their children have not done it, but they did.

It is unlikely for members of the royal family to talk about work and opportunities to improve one's self, which is probably why Meghan and Harry decided to take a step back. They wanted to explore work opportunities that could make them financially independent -- and that is exactly what they are doing now.

The Life Outside Being Royal

Now that Harry and Meghan are no longer senior members of the royal family, they can indeed explore the possibility of a new partnership with Disney. After the brief transition period which is set to end in April, the Duke and Duchess of Sussex can start setting their new goals to help them achieve financial independence.

Buckingham Palace confirmed that the two would be stripped off their HRH titles, but they would still maintain their Duke and Duchess of Sussex titles..

The Palace also revealed that the royals will be spending more time in North America in contrast to what was previously announced.

According to a close friend of Meghan who spoke with The Daily Mail, the voiceover work that Meghan spoke off with Disney is only the beginning.

Another source told the publication that there is more collaboration to come in the future.

"Meghan has no regrets about leaving the royal family and the sky's the limit. They (Meghan and Harry) felt like a huge weight has been lifted off their shoulders," the friend added.

The couple has been spending quality time with their son Archie. Meghan has been cooking homemade baby food for Archie, too.