How would you feel if you see your partner getting touchy and comfortable with someone from the opposite sex while you are literally just a few steps away? Well, it could feel a little awkward.

Well, just imagine how Tom Ackerley felt when his wife, Margot Robbie, had a sweet reunion moment with Leonardo DiCaprio -- the man she once got naked with on screen.

During the 92nd annual Academy Awards last Sunday, Margot and Leo -- who co-starred in the Quentin Tarantino film "Once Upon a Time in Hollywood" -- had an in intimate reunion which led to some touching, hugging and kissing.

The 29-year-old actress stunned in a navy blue vintage dress from her go-to designer, Chanel (after all, she is the brand's ambassador).

The "Bombshell" actress made her look even classier with the sapphire and pearl brooch embellishments, which she paired with Chanel bag, accessories, classic makeup, neat curls, and show-stopping ruby red lipstick. 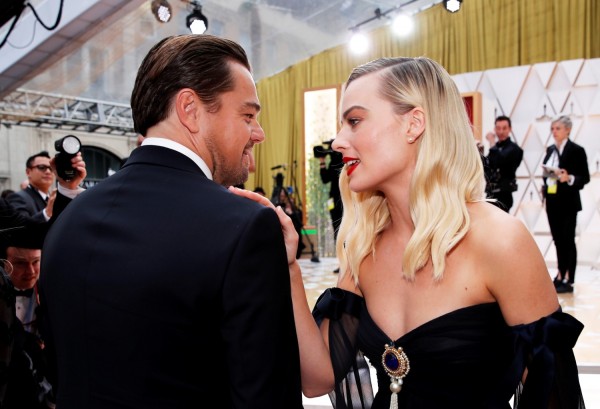 Both Margot and Leo are nominated for their respective roles in the said movie. But before getting on their seats, the A-listers had a moment to chat in the red carpet.

In the photos taken by hundreds of photographers in the red carpet, Margot and Leo were spotted getting too affectionate with each other. The actress carefully put her hand on Leo's arms, and he reciprocated it by touching her hips. The two exchanged a brief hug and kiss on the cheek.

Well, it may look awkward, but it seems like Tom did not have bad blood over this intimate reunion caught on cam. Instead, he let his wife shine on the red carpet and briefly followed her on their way inside the Dolby Theatre in Los Angeles. 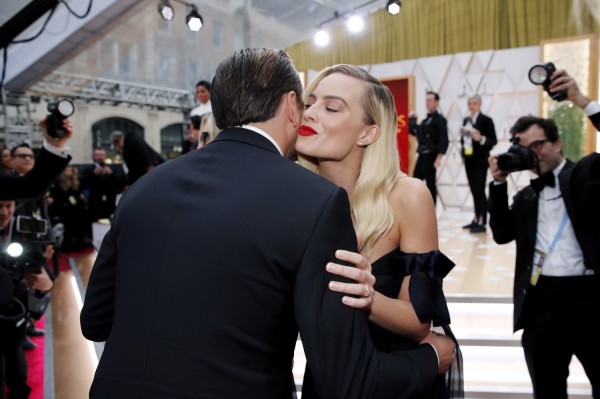 Before working together in "Once Upon A Time In Hollywood," Margot and Leo first worked in the 2013 box office hit "The Wolf of Wall Street." They portrayed the role of husband and wife, Naomi Lapaglia and Jordan Belfort.

Margot got nothing but good words for her on-screen husband and gushed about him on her interview with Grazia.

"He's an incredible actor; everyone knows that. But he's also a really awesome down to earth person, so it was a really lovely experience. I was very fortunate," Margot said.

Leo felt the same way about Margot and was all praises for his co-star in his 2019 Marie Claire interview.

"Seeing Margot come in and read that scene with me, I just knew I was witnessing a dynamic presence in cinema that was about to be," Leo said.

"[Martin] Scorsese and myself were blown away by how much she gave back to the scene, fought back, and we both immediately knew she was going to have an incredible career."

Margot Robbie, Tom Ackerley Reportedly Expecting For Their First Child After Being Spotted In THIS Place

Margot Robbie is reportedly pregnant with Tom Ackerley's baby after they were spotted shopping for baby clothes; is this true?

Are You SERIOUS?! Jared Leto from 'Suicide Squad' Says He Was "The Good Boy" On Set!! Was the Joker Just Joking About His Cast "Gifts"??

Are you SERIOUS? Despite certain rumors about the actor going full method for the role, Jared Leto says he was in fact "the good boy" on set.

Brad Pitt and Margot Robbie reportedly developed a secret romance while filming 'Babylon'; how true is this?

Johnny Depp in 'Pirates of the Caribbean' Update: Disney Reveals What Will Happen to Jack Sparrow

Johnny Depp has been sensationally asked to step down from his famous role in the "Pirates of the Caribbean."

Is Margot Robbie's career already flopping despite the success of her films and shows?

Is Margot Robbie shifting her career from acting to reality TV?

Experts: The Next "Pirates of the Caribbean" Film Will Be a Flop Without Johnny Depp

The "Pirates of the Caribbean" franchise cannot seem to work even with a female element.

The Suicide Squad: 2 Shocking Details We Learned From DCEU Synopsis