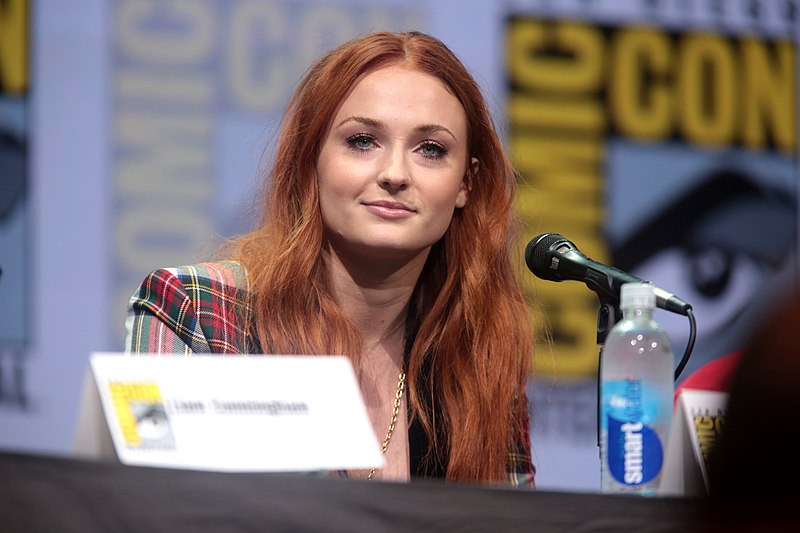 Being rich and famous has its ups and downs, especially if you are considered one of Hollywood's favourite couples like Joe Jonas and Sophie Turner. One of the many prices the couple has to pay is being randomly photographed by paparazzi without their consent.

The couple, who has been together for four years now, has mastered the art of dealing with annoying privacy invaders and has won the internet multiple times with their paparazzi antics.

Over the weekend, the "Jonas Brothers" member and the "Game of Thrones" star were once again spotted having some private time strolling the streets of Los Angeles, California.

The 30-year-old Joe is sporting a blue Bart Simpson shirt and black jeans, while the 24-year-old Sophie opted for a casual Davie Bowie raglan shirt and grey shorts. As the couple walked down the street, Sophie was holding a thick sweatshirt, which she carried in front of her stomach.

It could be recalled that in February, multiple news outlets reported that Sophie is already pregnant and that the couple is expecting their first child after almost 10 months since they tied the knot.

The power couple has yet to confirm or deny the pregnancy speculations, but they were also recently spotted doing some baby clothes shopping -- which made the rumours more profound.

Caught on a "Naughty" Act

In the recent paparazzi shots making rounds on social media, Sophie and Joe were first spotted grabbing lunch with a friend in Studio City.

But things got a little interesting when the two walked out again, and Sophie's husband was photographed being "all hands" on his wife.

In the first photo, Joe's hand could be seen behind Sophie's. At first, it looked like a simple gentleman gesture of assisting the lady as they walk a tiny street. But on the second photo, Joe was obviously cupping Sophie's left butt cheek!

While the photo looked like Joe could not help but get naughty around his gorgeous wife in public place, it seemed more like the couple was once again in the mood to troll the photo snappers and gave them something juicy to sell.

Sophie and Joe are not new to trolling paparazzi who keeps following and taking photos of them.

In 2017, while the couple was out and about with DNCE's Cole Whittle in Los Angeles and spotted a paparazzi, instead of covering their faces to avoid being photographed, the trio decided to mess around with the snappers.

They suddenly unleashed some martial arts moves: leaping into the air, doing flying kicks, turning around, and doing dramatic poses. On the same day, while grabbing lunch, the couple trolled the paparazzi once again by trying to do the same thing to them using an old school analogue camera.

In 2018, Joe and Sophie also made headlines after challenging a starring contest with paps, takings snaps while they have some quiet lunch date. The couple looked serious with their eyes wide open as they stare straight to the photographer's lenses.

This paparazzi photo of Sophie Turner and Joe Jonas taking the piss literally looks like a surrealist painting criticising celebrity culture I’m obsessed with it pic.twitter.com/BNTsV7ya5u — Adam (@Iipscar) May 5, 2018

In another occasion, the couple let the paparazzi know that they are aware of them being around by posing with binoculars and giving the invaders a middle finger that they deserve.