Cody Simpson and Miley Cyrus have officially reached their sixth month anniversary as a couple.

The Australian singer took to Instagram his heartfelt message for the "Party in the USA" hitmaker.

"6 months with you is worth a lifetime with anyone else. I love you," Simpson wrote as he posted a black and white photo of Cyrus casually sitting in a dining area. 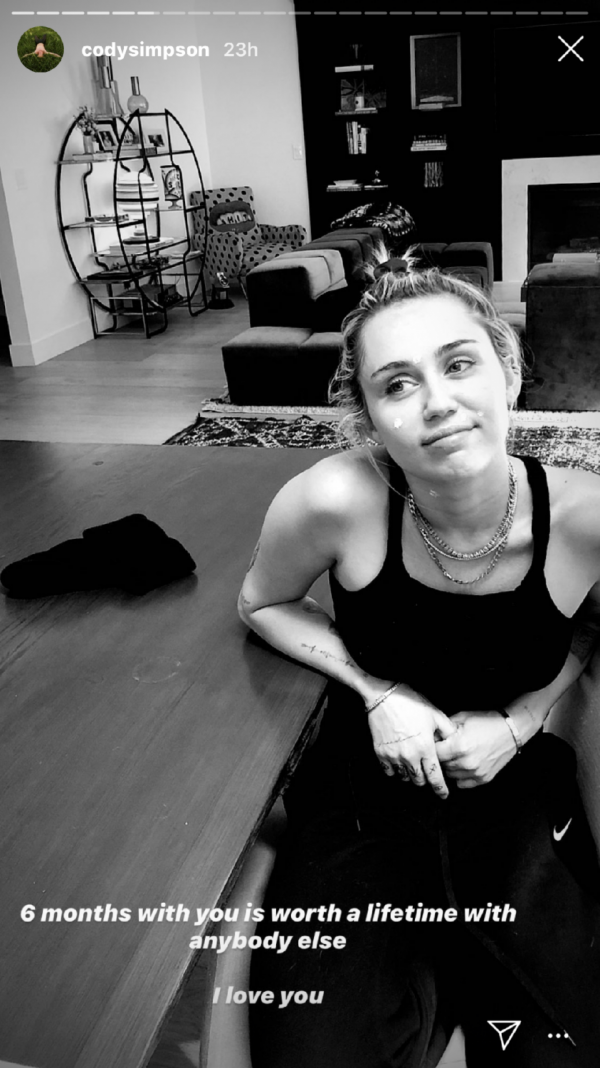 It is pretty obvious that the "Summertime in Our Lives" singer is head over heels with his girlfriend, as he also posted a warm tribute to the 27-year-old songstress in celebration of the recent International Women's Day.

"Happy women's day to the strongest, most beautiful & extraordinary woman I've ever met," the Aussie singer captioned in his IG Story.

Moreover, as their relationship grew stronger, Cyrus and Simpson knew that with their undeniable connection, they are "good for each other"

Since they are both musicians, they "understand each other's lifestyle" despite having crazy schedules and endless tours.

No Baby Plans Yet for Miley and Cody

Although the couple has only been in a relationship for half a year, fans are asking whether they will take it the next step and build a family together.

The "Pretty Brown Eyes" singer addressed the baby rumors and admitted that they are taking things slow.

In his previous interview with "The Kyle & Jackie O Show," host Kyle Sandilands asked if they are planning to have babies in the future.

"Do you want babies, or are you still doing the pull-out thing?" asked Sandilands, to which the Aussie hottie replied, "None yet, mate."

Rumors sparked about their relationship when the newly single Cyrus was spotted locking lips with Simpson in a grocery store in Los Angeles sometime in October.

Following this, the actress-singer confirmed their relationship through her Instagram where she posted a topless photo of the 23-year-old Aussie singer with the caption: "22-check, Australian (my type) - check, abs-check."

The former "Hannah Montana" star also clapped back at netizens criticizing her and her current relationship with Simpson.

"I know the public feels invested in my past relationship because they felt like they saw it thru from the beginning...I think that's why people have always felt so entitled over my life and how I live it because they've watched me grow up...but I am grown now and make choices as an adult knowing the truth/details/reality. People only 'know' what they see on the internet."

Cyrus and her ex-husband, actor Liam Hemsworth met in 2009 during the set of Nicholas Sparks' romantic drama "The Last Song." Since then, the two shared a rocky on-again-off-again relationship until they decided to take their relationship up a notch after they got engaged in 2012.

After their marriage in December 2018, the two decided to call it quits August the following year.

As for Simpson, his most serious relationship was with the supermodel Gigi Hadid. The two dated for two years after they split in 2015.