Bella Hadid's IG game is too strong and nobody can keep up!

Known for her savage photoshoots and killer catwalks, the 23-year-old supermodel blessed her nearly 30 million Instagram followers with a sultry snap from her home as she underwent self-imposed quarantine due to the ongoing coronavirus pandemic.

The stunner went braless while showing off her chiseled abs as she donned an open yellow fleece jacket while topping off the look with a 90s inspired bandana and pearl necklace.

"A girl and her favorite yellow jacket: a series," she wrote in her Instagram account which gained more than 820,000 likes. 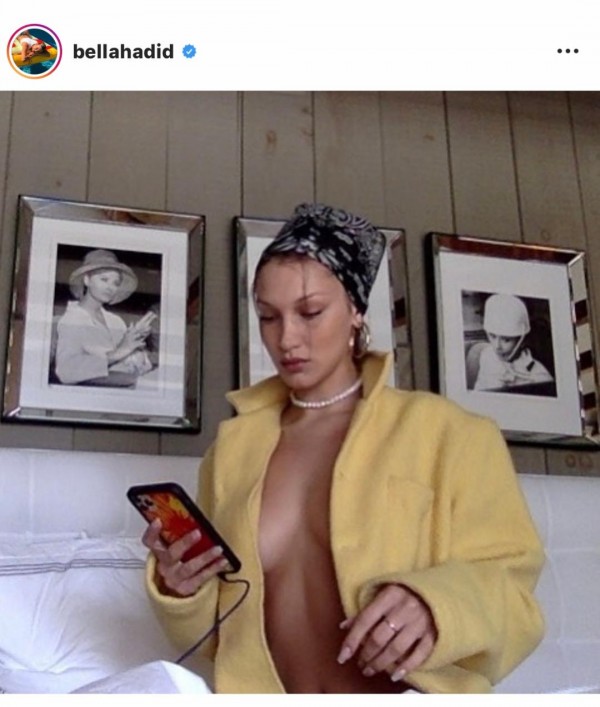 Her second photo, still sporting the same look, reached over 1 million likes as she struck a pose while laying in her bed with an open jacket flaunting her sizzling body that leaves little to the imagination. 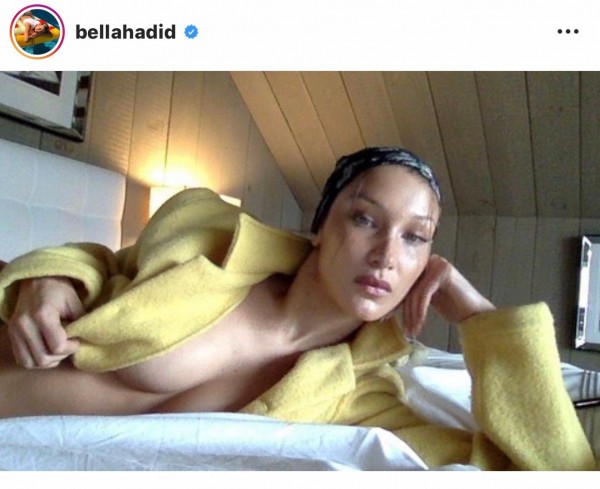 Her equally famous friends, such as fellow IMG model Hailey Bieber, responded "go off the..." with flames emoji.

Former Fifth Harmony member Normani commented "you fine," while the world-renowned fashion designer Marc Jacobs replied hearts emoji to which the supermodel answered back with heart and smiley emoticon.

Like most millions of people under government-mandated lockdown, Yolanda Hadid's daughter found a way to entertain herself amid the COVID-19 pandemic.

Fans went crazy when she caved in with the TikTok craze as she lip-synced "Pew Pew Pew" by Auntie Hammy together with her friend Lauren Perez while dancing in fashionable loungewear wearing a pink sports bra and white joggers.

The viral post gained more than 7 million likes as of this writing.

Other Hollywood celebrities who joined the TikTok bandwagon are power couples Justin and Hailey Bieber as they choreographed "Lean Wit It, Rock Wit It" by Dem Franchize Boyz.

Next on the list is music icon Jennifer Lopez and fiance Alex Rodriguez, who danced "Something New" alongside their kids Max, Emme, Ella, and Natasha.

Lastly are BFF's Kaia Gerber and Tommy Dorfman in their version of King Princess' "Hit the Back" choreography challenge.

While the Chinese video-sharing social networking service dominates the scene, Hollywood A-listerd used their influence to raise awareness about the ongoing crisis.

The IMG supermodel joined other celebrities as she encouraged her fans to stay indoors while eating her burrito as she goes topless.

"Me and my burrito telling you to stay inside! not only for the sake of just yourself but also for literally the entire world and all of the people that you love," Bella captioned her Instagram with a flirty photo.

She continued by reminding everyone "not to be selfish" and that this will all be worth it if we "work together."

Hadid ended her post by saying: "Be kind, Be respectful, and wash those da** hands' people!"

Tags: bella hadid yolanda hadid Gigi Hadid celebrity tiktok tiktok challenge
© 2021 EnStars.com All rights reserved. Do not reproduce without permission.
Most Popular
You May Also Like

Knowing that Bella Hadid belongs in a family full of supermodels, rumors still questioned her physical looks, whether or not she had ever gone under the knife.

Bella Hadid recently opened up about her social anxiety problems and how the she dealt with public pressure.

The 24-year old graced the red carpet for the Cannes Film Festival with a boldly revealing outfit choice.

Bella Hadid subtly confirms her relationship status after she posted a sweet photo of her kissing an unkown man. The internet investigates and found the identity of her new boyfriend.

Bella Hadid's boyfriends list is pretty extensive, but there are a few that really stand out.

Bella Hadid celebrated her 24th birthday in a big way.

Despite the older Hadids being the first ones to have the spotlight shine on them, these days, Gigi and Bella Hadid are the ultimate stars of the family.

Bella Hadid opened up and spoke the truth about the invisible illness she has been dealing with for years now.