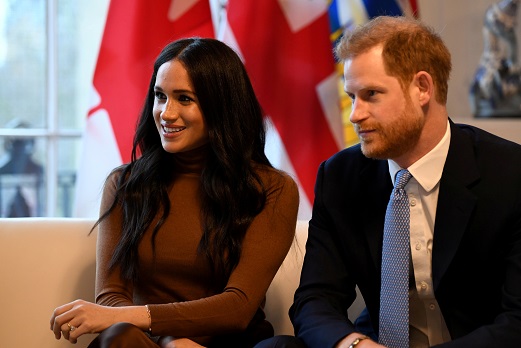 Prince Harry and Meghan Markle decided to step down as senior members of the royal family in January. Aside from losing their titles, they also agreed not to use the Sussex Royal brand and the word "royal" in any of their endeavors -- be it in the U.K. or any territory outside the reign of the monarchy.

However, they broke the deal again and used their old logo -- with the crown -- in a letter they penned recently.

On Monday, the Duke and Duchess of Sussex wrote a thank you letter to U.K. charity StreetGames and shared them on their Twitter account.

"We wanted to write and express our heartfelt thanks to the team at StreetGames following their support delivering Hubb Community Kitchen meals throughout London," the Sussex couple said in their letter. "The impact of Covid-19 has been a scary and testing time for so many people from all walks of life, all over the world.

Prince Harry and Meghan also praised StreetGames for allowing goodwill to prevail during these challenging times by helping disadvantaged children get involved in sport.

Meanwhile, StreetGames later tweeted how grateful they are for the couple's letter and continued support amid the global crisis.

Wow! Thank you so much Harry and Meghan for your kind words and your continued support for StreetGames and the brilliant local organisations working to support their communities in these challenging times pic.twitter.com/4h9bMGTuTR — StreetGames (@StreetGames) June 21, 2020

Though Prince Harry and Meghan's gesture was well-received by the organization, some netizens chose to slam the royal couple for using the same old logo despite officially departing from The Firm in March 2020.

One person wrote, "How nice of them to send this out using the symbol they have left behind. Must have leftover stationary."

"Why are they still using the Royal symbol," another one commented. "They need to take that crown out of that M logo."

Aside from the website, their Instagram account with over 11 million followers is still up. Nonetheless, they posted their last update on it at the end of March, just before they officially became non-working royals.

Despite the backlash, several fans chose to defend the Sussexes and reasoned out that Meghan is still a royal who is married to the son of the future king, Prince Charles.

Fans added that despite their exit, the two can still use the coronet since they are still members of the royal family.

One supporter said, "They never left it behind, they are still patrons of U K charities and are president and Vice President of the Queen's Commonwealth Trust. Take you hatred and faultfinding somewhere else."

Currently, even after they left, they have been dedicating their time serving their organizations and groups. They recently showed their support for the Black Lives Matter movement and even gave away food packs amid the pandemic.