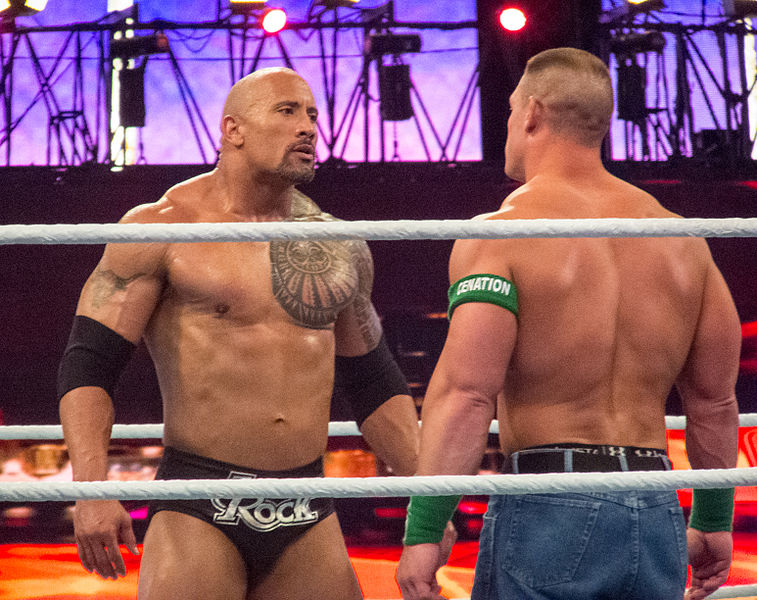 John Cena and Dwayne Johnson are now appearing on TV series and movies, but they also stood on the same WWE ring multiple times in the past.

Before they became the great actors they are now, Cena and Johnson were both famous WWE superstars and they had several professional fights in the past.

For instance, they participated in WrestleMania main events back in 2012 and 2013. However, their supposed professional fight turned into a nasty feud after things ended up "pretty personal" between them

In a Q&A session with The Sun, John admitted that he regrets his past misunderstandings with his former co-wrestler.

He then added that there is a grey area in WWE "where imagination becomes very real." Cena revealed that he and The Rock were standing in that place while watching each other's move and feeling not-so-happy with each other's existence.

Aside from pointing out that "grey area," he also confessed that it was his fault to call Dwayne a sellout since the "Jumanji" actor was flip-flopping his time between WWE and his acting career.

"It was stupid of me. It genuinely was. That was my perspective at the time," Cena continued.

Per Cena, he failed to appreciate Dwayne's desire to find what he really wanted to do personally. He also got threatened how Johnson's personal success could affect WWE's global brand. Still, in the end, he realized that it was ignorant of him to think that way.

He also said that Johnson helped him have a successful transition to Hollywood stardom by personally opening the doors for him.

"I'm very thankful to Dwayne Johnson," Cena added. "His success has gotten me a lot of opportunities that I'm extremely thankful for, and certainly wouldn't have without him."

Dwayne went by his ring name "The Rock" in 1996 before he officially retired in 2019. He landed his first television acting job in 1999 and played the role of his father, Rocky Johnson, in an episode of "That '70s Show."

Since then, he continuously received record-breaking projects, so much so that his films are now worth over $10.5 billion worldwide, making him one of the highest-paid actors of all time. Some of his famous movies include the "Jumanji" franchise, "Fast & Furious" franchise, "Rampage," and "Central Intelligence."

Meanwhile, Johnson has become very active in speaking out for the people. He recently made headlines after he shared a heartwarming message amid the "Black Lives Matter" movement.

On the other hand, Cena is now a five-time United States Champion since he joined WWE in 1999. Over the past few years, he has also been establishing his name in the entertainment industry after he starred in comedy films such as "Trainwreck," "Daddy's Home," and in the "Transformers" spin-off, "Bumblebee."

Next year, he will be joining Dwayne in the latest installment of the "Fast & Furious" franchise, "F9."

Fortunately, after Dwayne stepped down from his wrestling career, the two became good friends and being rivals had no place in them anymore.