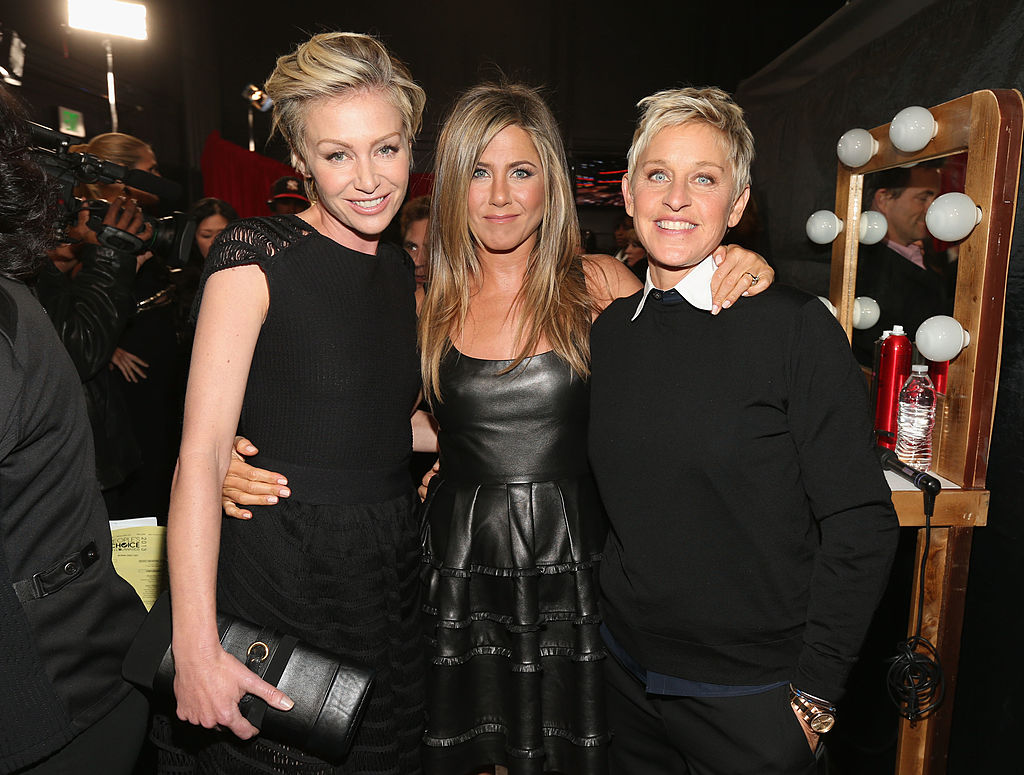 As Ellen DeGeneres enters probably the saddest and hardest moment of her life (or not, since she undergone so much worse the first time television dropped her), one can only wonder if this is truly her end? Where are her celebrity best friends?

With so many people calling her mean and racist, can she ever repair the damage to her reputation, and the dent to her "Be Kind" brand? Weirdly however, even though she is known as being one of the most compassionate human beings in Hollywood for years, none of the people who can vouch for her good side are speaking up!

Where are Jennifer Aniston, Miley Cyrus, Reese Witherspoon, and Sofia Vergara? Where are George Clooney, Ryan Gosling? Where are Barack Obama and Michelle Obama?

For her years on television, interviewing these celebrities and helping out ordinary citizens achieve their dreams,it is a wonder why not one has actually defended her. Could the rumors be true - Are they believing the allegations? Do they know the truth, after all? Are they afraid of being associated with a fraud? Or do they simply not care?

Ironically, these are some of the celebrities who Ellen DeGeneres actually defended in public when they themselves have gotten into some really nasty issues. Apart from those mentioned, there are simply too many celebrities whose image goals and publicity needs were met by "The Ellen DeGeneres Show." Where are they now that she's being bashed and slammed by staff and fans?

Prior to this scandal, now already being investigated by WarnerBros, E Online even said there was no better friend than Ellen DeGenerres during the COVID-19 pandemic.

The moment "The Ellen DeGeneres Show" was cancelled and got stuck in her home, she'd been phoning her friends to know if they are well. Then, she treated her fans to videos of her personal calls to them - the next best thing to televised celebrity interviews.

Ellen DeGeneres and Jennifer Aniston have been joking about being very close friends so much on her show that it is impossible it is not true. Reese Witherspoon too. In October 2016,  Ellen even defended Miley Cyrus,saying people should give her a break, after her provocative performance for the MTV Music Awards.  She said she is young and growing up quite beautifully. "What I like about Miley is that she is honest and there are not a lot of people in the business that you can sit down and look at them during an interview and know they are being authentic and honest and true to themselves," she added.

Maybe they know Ellen DeGeneres can handle herself, and that they have offered their shoulders privately during this controversy. But  it really is weird that no one has reached at all. Not one even tweeted about them knowing Ellen DeGeneres in a different light! Celebrities rarely shy away from defending people they know, even if they are being harshly bashed by their fans, but now it appears as if none has heard of the news.

They do not even have to go against what the staff are saying - but just say there is another side of Ellen that is true and genuinely nice. By staying silent, they may be letting think Ellen DeGeneres was truly a fraud, not only on television, but in real life.

It's also not as if the media has been quiet about this issue. There is now an investigation underway as to whether Ellene's talk show was truly toxic for her staff and some reports are saying staff are now rejoicing about Ellen's fate. It's one thing to lose fans, it's another to lose friends.

READ MORE: Ellen DeGeneres Doomed: Investigators To UNCOVER Her As One of the Biggest FRAUD Perpetrators