Like many Americans, she wants people to vote for him instead of Donald Trump.

Which is why she's encouraging her OnlyFans subscriber to vote for Biden with a very unique promise.

OnlyFans is a subscription-only service that helps creators earn money for subscribing to their channel.

Unlike YouTube, this platform allows naughty videos and pictures shared with paid subscribers of each channel.

Posting on her Twitter, the influencer said, "If you send me proof you voted for Biden, I'll send you a nude for free."

Along with the caption came a picture of Tana Mongeau posing in a string bikini. It included the hashtag #BootyForBiden and a link to her OnlyFans account.

After posting her condition, she revealed that she received over 10,000 messages from people who proved that they were voting for the Democratic nominee.

She also told her followers in an Instagram Story that her OnlyFans DMs were broken.

"It's the best thing ever. You don't need my a** to make you go vote. So go vote because you wanna see a change in this country just like me, and thank you to everyone who joined me today. Booty for Biden."

In another Instagram post, she said, "Update #bootyforbiden broke tana uncensored. Love to see so many ppl who want change as badly as [I] do." 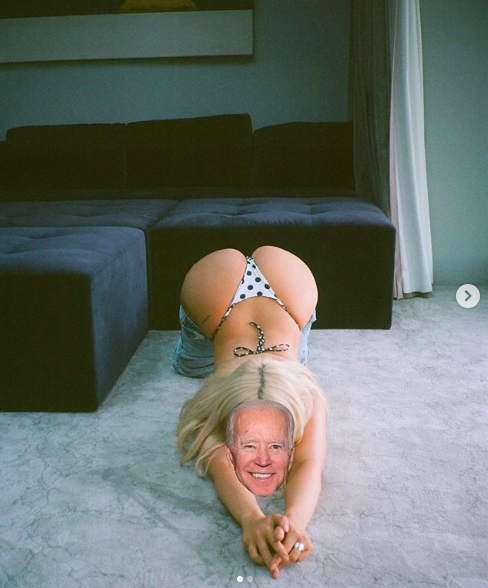 Mongeau added, "u don't need my ass to know what's right for America so go VOTE! today was fun, ily."

However, what Tana Mongeau did may get her in trouble. What she's doing is "vote buying" and "ballot selfies" and are considered illegal.

Meanwhile, the 22-year-old YouTuber posted a video on TikTok in response to a comment that says, "Trump 2020."

Mongeau sarcastically told the person saying, "my naked body is doing so many things for Biden."

Tana Mongeau isn't the first person to do something creative in order to urge people to vote in the upcoming elections.

Last week, Kylie Jenner used her platform to encourage her almost 200 million Instagram followers to vote in the upcoming elections.

She first posted two sultry pictures on her Instagram with the caption, "But are you registered to vote? Click the link in my bio. Let's make a plan to vote together."

Following the "Keeping Up With the Kardashians" star's post, there has reportedly been an increase in voter registration at 80%.

CEO for Vote.Org Andrea Hailey told FOX News, "After Kylie Jenner's Instagram post, the surge in interactions with Vote.org's registration verification tool speaks to an energy among young Americans who want to make sure their voices have heard this election."

Aside from the Kylie Cosmetics mogul's bikini post, she also included a step-by-step instruction on how to register for voting.

She wrote, "We must all make our voices heard this November. Now, more than ever, we need change."

"We have the power to make a difference. But we need to VOTE."

Though she has urged fans to vote, Kylie Jenner didn't speak who her particular presidential candidate is.

#ApologizeToGabbieHanna begins to trend in light of the YouTuber Gabbie Hanna's recent drama with Trisha Paytas.

David Dobrik Trends After Coming Back At Vlogging After YouTube Hiatus

David Dobrik breaks his hiatus by dropping a new vlog on the streaming platform!

The 2021 Oscar Best Pictures nominations list is finally out. This year's nomination is a strange one because the award show recognized films released during a year where movie theaters were mostly closed.

Demi Lovato comes forward and discusses her near-death experience in her documentary, "Demi Lovato: Dancing With the Devil".

The joke time is over, as Jeffree Star finally spoke seriously about the outlandish rumor surrounding his and Kanye West's names.

Jake Paul's Calabasas Mansion For Sale -- Why Is the YouTube Star Leaving LA?

YouTuber Jake Paul is selling his Calabasas mansion as he pursues a legitimate career in professional boxing.