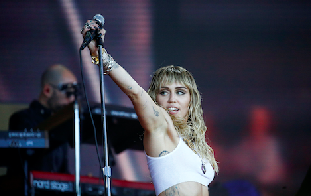 Miley Cyrus has some shocking revelations about an extraterrestrial encounter she had while driving across the California desert.

Admitting the whole ordeal in the newest Interview Magazine issue, Miley had an in-depth conversation with fashion designer Rick Owens.

Rick said that he could visit the infamous alleged secret military testing base called Area 51 in Nevada, and then Miley Cyrus asked him if he believed in UFOs.

"I don't really, but it seems a little arrogant to assume there's nobody else but us."

To which the Disney alum agreed to, saying, "That's what I f------- think," before she told her extraterrestrial story.

According to the "Midnight Sky" singer, she saw something in the sky that she couldn't figure out what it was as she drove along the highway of San Bernardino with a friend.

Then, she revealed unknown beings chased her.

"I got chased down by some sort of UFO."

Though the 27-year-old singer-actress was "pretty sure" about what she saw, she admitted that she also purchased weed wax from a guy in a van in front of a taco shop.

Miley confessed, "So it could have been the weed wax."

The said wax is known as honey oil that involves heating a cannabis plant material with butane to extract the THC, making it more concentrated and extremely potent.

The "Can't Be Tamed" singer added that her friend also saw what she saw, saying, "But the best way to describe it is a flying snowplow. It had this big plow in front of it and was glowing yellow. I did see it flying."

She continued, "There were a couple of other cars on the road, and they also stopped to look, so I think what I saw was real."

After her terrifying experience, Miley Cyrus admitted that it rattled her up, leaving her "shaken for five days."

She confessed that after the incident, the "Hannah Montana" star admitted to not looking at the sky the same because she thought "they may come back."

With the wild child using the pronoun "they," that's because she reportedly saw something sitting inside of the UFO.

Though she wasn't threatened, Miley claimed that they made eye contact.

"What really shook me, looking into the eyes of something that I couldn't quite wrap my head around."

Aside from the UFO story, Miley Cyrus also revealed she's working on a very special album cover filled with songs from a special rock band.

The "When I Look At You" hitmaker has covered numerous bands in past performances, including The Cure, Blondie, and The Cranberries.

It seems like she will also be belting out some songs by Metallica for a tribute album.

In 2019, the pop star sang "Nothing Else Matters" at the 2019 Glastonbury but felt like it wasn't enough, so she's going to be making an entire album with the rockstars' songs.

Miley explained, "We're so lucky to be able to continue to work on our art during all of this. At first, it felt uninspiring, and now I've been totally ignited."

Unfortunately, she didn't say when the covered songs or the entire album will come out.