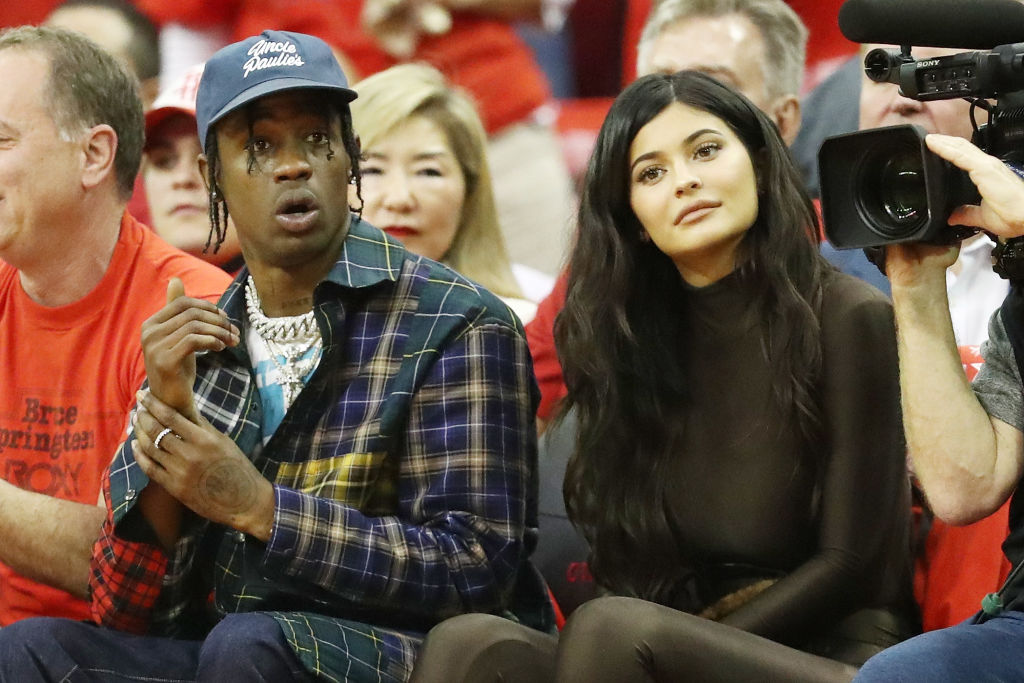 Kylie Jenner opted to have quality time with Travis Scott and their adorable daughter, Stormi Webster, instead of partying on a private island for her sister Kim Kardashian's 40th birthday bash.

Earlier this week, the 23-year-old makeup mogul was seen exiting her pink private jet with the 29-year-old rapper and their 2-year-old daughter. While their destination remains unknown, it looks like the family-of-three went on a quick weekend getaway.

Based on the photos obtained by "Hollywood Life," Kylie could be seen heading down her private jet while wearing an all-white outfit, which she paired with cream-colored Yeezy slides and a pink Hermes Birkin bag. The "Kylie Cosmetics" boss babe made sure to protect herself from the coronavirus pandemic by wearing a face mask.

On the other hand, Travis Scott was photographers wearing a patterned long-sleeve button-up, gray pants, and a pair of black sneakers. He finishes his look with a blue hat as he carries a custom dark luggage with the famous "Cactus Jack" logo on it.

Kylie and Travis' little bundle of joy and one of the internet's favorite celebrity babies were also seen exiting the private jet carried by a nanny. The little fashionista was wearing a black shirt and grey sweat convo while barefoot and sipping an animal pacifier.

Kylie clearly chooses to spend time with Travis and Stormi instead of partying with Kim and the rest of the Kardashian-Jenner crew. Does it mean she has rekindled her romance with the "Sicko Mode" rapper?

Ever since splitting up last year, Kylie and Travis have remained close and excellent co-parents to Stormi. They both manage to give the young lady a loving family set-up even though they are no longer connected romantically.

As of writing, neither Kylie nor Travis has yet to confirm that they are back in each other's arms.

Kylie Jenner's recent outing with teh father-and-daughter tandem came after she opens up about showing her most authentic self to the public.

Kylie recently joined beauty vlogger James Charles on his YouTube channel to create a Halloween makeup tutorial. During their makeup session, the mother-of-one confessed that not being able to showcase her true self makes her sad.

"I think that I showed my true personality for so long ago on Vine and Instagram. But as I got bigger and bigger, I realized when people used to say really mean things about how I really am, my personality and what I love the most about myself, it would hurt me more than almost playing a character," Kylie explained.

"So I just started doing a little less, which is sad. It makes me sad," she added.

During the interview, Stormi's doting mother also opened up about wanting to expand her family, which means giving Stormi a sibling.

"I want more so bad. I actually think about it every day. I just still don't know when. I'm not planning; I don't have a time for that to happen," Kylie revealed.

Kylie has always been vocal about wanting to have more kids, but not in the near future.