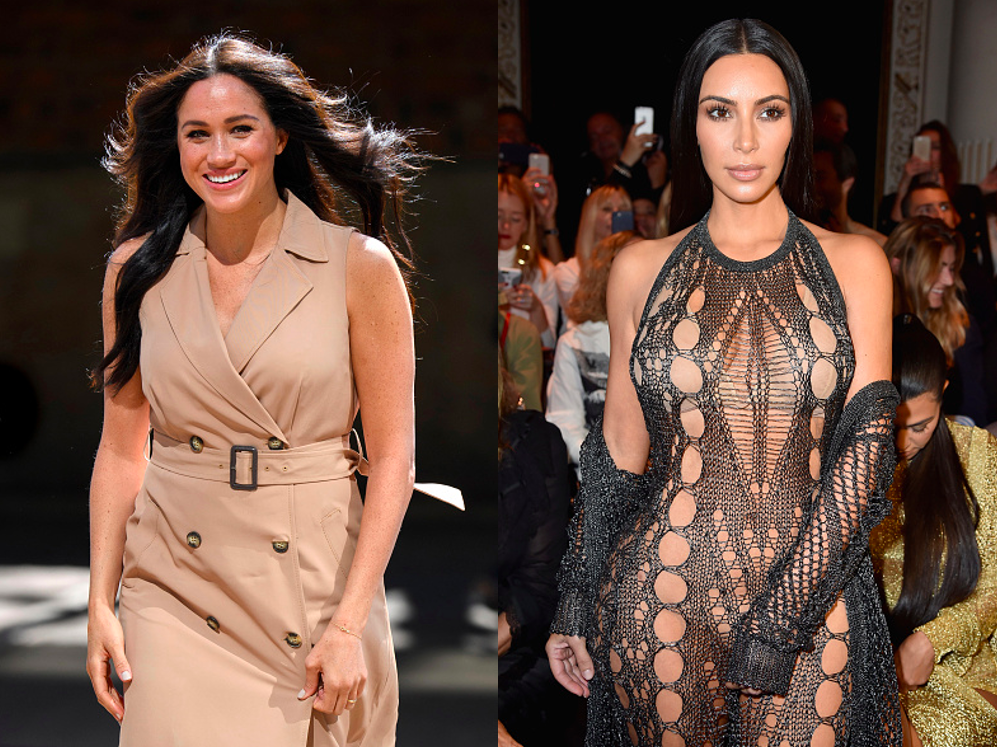 Is Meghan Markle desperate to look like Kim Kardashian and possibly de-throne her?

Life & Style alleged that the Duchess of Sussex plans to go under the knife so she can follow in the reality queen's footsteps.

Aside from the "Keeping Up With the Kardashians" star's ongoing law education, Meghan is inspired by her ability to ignore nasty comments and, of course, Kim's great personality.

But the 39-year-old mom is reportedly drawn to Kim's physical appearance. She is said to be considering some Botox and fillers to look like the mom-of-four.

Because of this, the wife of Prince Harry is allegedly thinking of doing some plastic surgery to make her backside look as voluptuous as the KKW Beauty mogul.

The Duke, however, is in a tough spot. Because though he respects Kim Kardashian and their family's empire, the 36-year-old blue blood doesn't understand his wife's obsession with her.

With the Kardashians' reality show coming to an end, the outlet alleges that it's natural that Prince Harry and Meghan Markle would fill that void.

A source told Life & Style, "Rumors have been swirling for months that she and Harry are doing a reality show."

In another report by New Idea, Meghan Markle and Kim Kardashian are allegedly facing off for a position in the White House.

The outlet claimed that the Duchess of Sussex has always been interested in running for president. Kim's husband Kanye West's recent announcement, who will be running for the 2024 elections, is also threatening the former "Suits" actress.

A source told the outlet, "The last thing she wants is to be up against someone like Kanye and Kim, who would steal her thunder in the glamour stakes."

Before announcing that she would be running, Meghan is said to be watching the political scene like a hawk.

The mom-of-one is also allegedly figuring out the best strategy she could take.

The insider shared, "The worst scenario for her is going head-to-head with a celebrity, and she sees Kim as a genuine rival because of her wealth and popularity. They're two fiery, competitive characters so expect some major fireworks."

Gossip Cop called the stories fake "on so many levels."

Life & Style's report is bogus because Meghan Markle is reportedly not taking part in a KUWTK type of series.

The Sussexes have also said in a statement that they will not be taking part in a reality show.

Meanwhile, though there have been rumors that Meghan Markle wants to become a president, it's unlikely to happen because she stepped down from senior royal life due to privacy issues.

If she wanted to become a president, she'd be in the spotlight all the time.

Furthermore, the only connection Kim Kardashian and Meghan Markle have in common was when the reality star defended the Duke and Duchess of Sussex.

She said in an interview how she empathizes with the couple and said that everyone has their journey.

Kim further said that Prince Harry and Meghan Markle have the right to have a secure and safe place for their family.