Most people might know Antoni Porowski as the food and wine wizard in the popular Netflix series Queer Eye, but less actually known of his acting talents.

That is why many are quite surprised knowing he actually auditioned for a famous music icon's music video-Taylor Swift, no less!

Although the music video of Taylor Swift's 2014 song "Blank Space" featured supermodel Sean O'Pry, Antoni was still able to make a cameo in one of the singer's later music video, "You Need to Calm Down" from her 2019 album "Lover," alongside his fellow cast members (or the Fab Five) in "Queer Eye:" Tan France, Jonathan Van Ness, Karamo Brown, and Bobby Berk.

Antoni even hinted at his friendship with the singer when he went on a kitchen-guru mode quipping on a post about the MV, "totally warned you about what happens when you don't put lids on blenders." 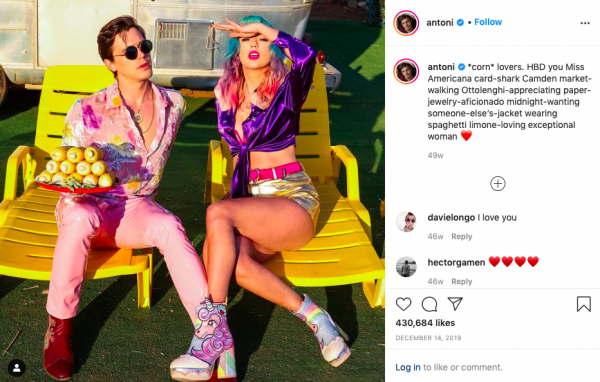 Netflix's "Queer Eye" is undeniably Antoni's most significant break on television. The Polish-Canadian chef has since been a regular member of the cast, present in its five seasons.

He has, after all, been trained in the Neighborhood Playhouse School of the Theatre in New York.

Maybe the brooding male lead and Taylor Swift's love interest in the "Blank Space" music video was never meant to be his anyway since better projects turned up his way.

Of course, Taylor Swift is famous not only for her musical influence but also for her equally beautiful music videos.

Currently, the powerhouse pop star has recently released a concert film over at Disney Plus entitled "Folklore: The Long Pond Studio Sessions," which was tagged as an "intimate concert" of her record-breaking album.

Taylor Swift's song-writing dates back to when she was very young. Though everybody knows she's musically talented, what surprised many Swifties recently was her boyfriend - British actor Joe Alwyn.

In Taylor's Disney Plus documentary, she revealed that her boyfriend helped her write songs such as the now-Grammy-nominated "exile" and other songs on the Album of the Year Grammy nominee "folklore."

The 30-year-old revealed that William Bowery, her mysterious co-writer, is in-fact Joe.

She said in the documentary, "There's been a lot of discussion about William Bowery and his identity because it's not a real person."

"So William Bowery is Joe, as we know. And Joe plays the piano beautifully, and he's always just playing and making things up and creating things."

The 30-year-old hitmaker even revealed during the development of "exile," the actor sang the part of the duet that Bon Iven recorded. Taylor also revealed how Joe wrote, "the entire piano part" of the song.

The album "folklore," which was created only this year during the coronavirus lockdown and was released a few months later, is more mellow, restrained, and mature than Taylor Swift's previous albums.

In this current album, she delves into the darkness - which got her rave reviews from critics.