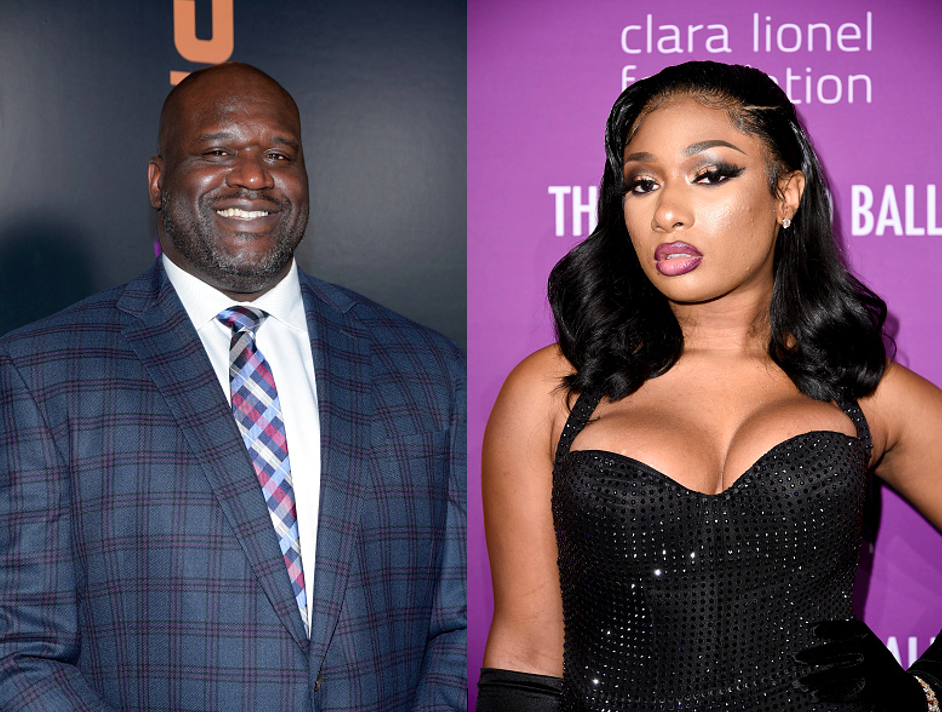 TMZ caught up with the former basketball professional and asked him if he was trying to shoot his shot with the rapper when he popped into her Instagram Live in early December.

"This is what happened, America," Shaq started in TMZ's video.

"I was in there, someone said, 'What are you doing in here?' and I typed what I typed. I wasn't trying to hit on her."

In mid-December, Megan Thee Stallion went on Instagram Live and asked her fans in the chat what they were up to at that moment.

Then in the chatroom, Shad responded, "Watching that booty."

Followers who were on that Instagram Live went crazy over the seemingly flirty comment. Even Shaquille O'Neal's son, Shareef, noticed.

He even made a TikTok video about the entire situation, where he captioned it with, "I feel you, pops."

When Shaq was asked if the "WAP" rapper responded to his comment, the athlete downplayed it by saying, "I don't know. I didn't even check."

The new video was the first time Shaquille O'Neal commented on the entire ordeal.

But Hollywood Life reported on December 16 that his comment about Megan Thee Stallion was "all in good fun."

Their insider explained, "Shaq is definitely a fan of Megan, but he isn't chasing her."

"It was just a funny and honest comment because he does appreciate her talents. He got a huge kick out of his son roasting him over it."

But Shaq, who is married to Shaunie from 2002 until 2009, didn't think that his comment would gain so much traction.

Hollywood Life's source added, "He thought his response was hysterical, and he was cracking up over the situation when he saw it go viral on social media."

"Shaq is a jokester through and through."

In other news, Megan Thee Stallion caused a stir this summer after collaborating with Cardi B on their racy song, "WAP."

The artists were being upfront about what they do in the bedroom and twerked up a storm in the music video.

While fans loved the song's fun and bold approach, many were shocked by its explicit content.

Even Snoop Dogg criticized it for "leaving little to the imagination."

"Oh, my God. Slow down. Like, slow down, and let's have some imagination. Let's have some privacy, some intimacy where he wants to find out as opposed to you telling him," he said in an interview with Central Ave podcast.

But the "Savage" hitmaker is reportedly tired of listening to men's opinion of what women should do with their bodies.

The 25-year-old is finally claiming the power back in an interview with GQ magazine.

"Some people just don't know what to do when a woman is in control and taking ownership of her own body," the "Body" hitmaker said.

"I feel like for a long time men felt like they owned s-- and now women are saying, 'Hey, this is for me. I want pleasure. This is how I want it or don't want it.'"

She added, "It freaks men the hell out. It just comes from a place of fear and insecurity, like why would anyone be mad about my WAP? It belongs to me."