Zoe Kravitz is welcoming 2021 without a husband because she has filed for divorce from Karl Glusman.

People magazine claimed that the 32-year-old actress is leaving her husband of 18 years after being first linked to Karl in 2016 and swapping vows at a romantic wedding ceremony in June 2019.

Just months after the couple posted sweet tributes to each other on their first wedding anniversary, their matrimony is now said to be over. 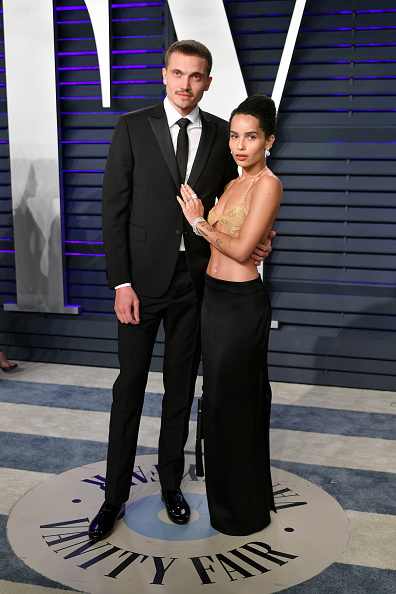 Karl posted a picture with a sweet caption for Zoe, writing, "One year. Not the year we expected... but I feel like if we can make it through this, we can take on anything."

He added, "I love you. More than anything."

Zoe posted a wedding photo of them with the caption, "One year."

A representative for the daughter of rock legend Lenny Kravitz and Lisa Bonet confirmed the split to People and filed the papers on December 23, 2020.

On Saturday, the "X-Men" star may have hinted that her marriage ended with a string of cryptic posts.

Zoe Kravitz took to her Instagram Stories to share numerous pictures of a sunny sky, a selfie, food, juice, and fireplace. She accompanied all photos with the caption, "new year/little things."

Further on her Instagram Stories was a meme - it showed a drag queen throwing out a black bag of trash that was labeled, "People, places and things that no longer serve my greatest and highest good." It was captioned "MOOD." 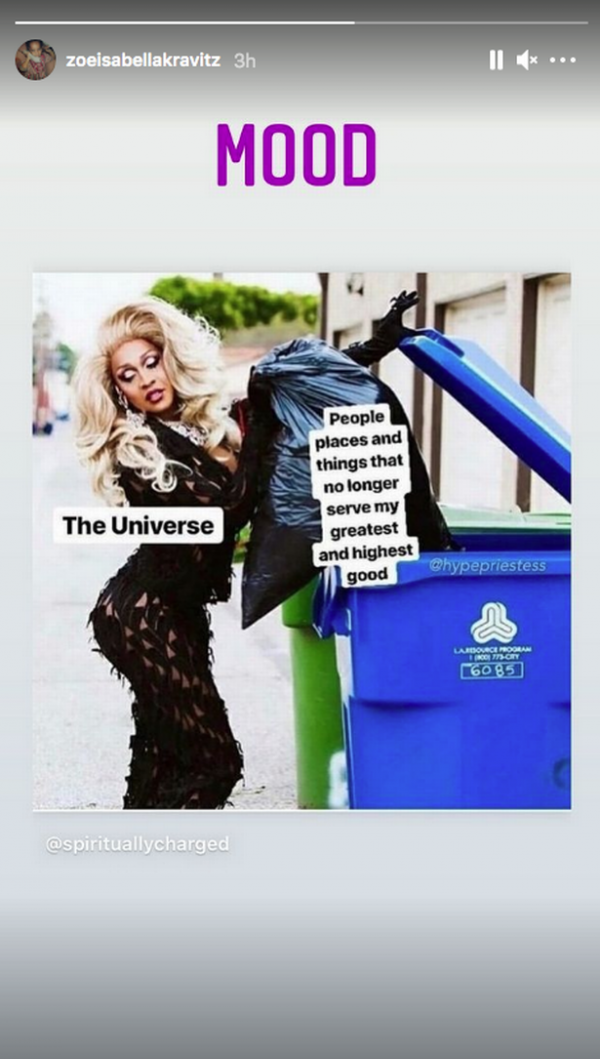 Karl Glusman is a 33-year-old actor who starred in several shows and films such as "The Neon Demon," "Nocturnal Animals," "Gypsy," and "Greyhound."

The pair were first spotted together in late 2016 in NYC, which fueled romance rumors.

In October, they held hands after hanging out with pals Cara Delevingne, Dakota Johnson, and Taylor Swift.

A few weeks later, the "Big Little Lies" star made her Instagram debut on her boyfriend's page.

In an interview with British Vogue, Zoe opened gushed about the night she met Karl.

"My friend knew that I wanted to meet someone - not even to get serious, I think just to get laid, to be completely honest with you - and he brought Karl. I instantly felt something."

By October 2018, Zoe Kravitz revealed she was engaged in an interview with Rolling Stone.

"I can be my weirdest self around him. It's so relaxing to be around someone where you can be a hundred percent how you feel."

Before confirming her engagement, she wore her diamond ring without fans knowing it and even flashed it during the 2018 Met Gala in May.

By June 2019, the couple tied the knot in an 18th-century Paris mansion owned by her dad.

Before their divorce, Zoe Kravitz had sweet things to say about Karl, saying he was "the one."

It helps that, based on the couple's joint Instagram statment about the split, the two seem to still be totally amicable towards one another.

The teaser trailer for the upcoming film KIMI is finally here!

"It Makes You a Little Kind of Spicy." The Official The Bat and the Cat Trailer for 'The Batman' Is Our Now!

As is explained in the new 'The Batman' trailer's caption: 'Vengeance equals justice, for both the Bat and the Cat.'

Links To Everything You Need Going Into The Weekend

Back in high school when I used to ride the bench on the JV football team, I had a coach who would drill in the fact that there is no I in team.

Do Channing Tatum and Lenny Kravitz Get Along? Singer 'Isn't Thrilled' About Daughter Zoë's Relationship with the Actor

It has been a while since Channing Tatum and Zoë Kravitz officially admitted their relationship this summer; however, one source reported that the actress' father, Lenny Kravitz, has bad blood on her new boyfriend.

Zoe Kravitz is officially single as her divorce with Karl Gusman has been finalized while her rumored romance with Channing Tatum heats up.

Channing Tatum and Zoe Kravitz's relationship seems to heat up as the pair was spotted with their bags together; where are they headed?

Zoë Kravitz and Channing Tatum were spotted in the East Village of New York City as they get close while on a bike ride on August 18.