Armie Hammer has been the subject of many news articles and social media because of the alleged leaked DMs that surfaced early this week.

While the person who created the rumor admitted that it's all fake (via unCrazed), more pieces of evidence are popping up that say otherwise.

For instance, on Instagram, fans have discovered some of the unusual hashtags the "Call Me By Your Name" actor follows.

Some of the hashtags include provocative terms such as "shibari," meaning a form of Japanese rope bondage, and "knife skills."

The hashtag "knifeskills" could be something many chefs follow because it's considered a culinary skill; the "shibari" is said to be not only a type of Japanese rope bondage, but it's also associated with people who have fetishes. 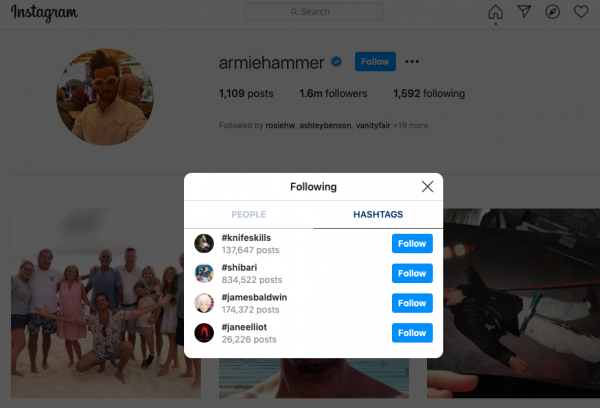 It is said that the skill is learned by people for mental stimulation and relaxation - but may also be used for intimate pleasure.

The 33-year-old actor has also been discovered to follow a fetish clothing brand named "Dr. Harness." The business page has bondage-inspired seductive lingerie.

The leaked DMs were allegedly sent to a woman later publicly leaked it an anonymous but now-private Instagram account with the username, House of Effie.

The alleged DMs' authenticity is not yet verified, but the woman behind the Instagram account shared new alleged messages between him and the actor, which he referred to her as his "slave."

House of Effie tried to prove the genuineness of the screenshots by sharing private pictures allegedly from the actor.

One of the most notable things in the picture showed a tattoo that looked similar to Armie Hammer's tattoo on his finger. His ex-wife's initials inked on his ring after he and Elizabeth Chambers tied the knot in 2010.

Meanwhile, House of Effie shared a video that referenced her affair with Armie Hammer, which later prompted other women to come forward with their stories.

Meanwhile, his estranged wife has been completely shocked to find out about his alleged "extreme kinks" and even called the actor "a monster."

An insider told the Daily Mail that Elizabeth believes these women's stories are all real.

"A lot of these women have reached out to Elizabeth, and although she didn't want to admit it to herself at first, she knows how they are speaking the truth."

Meanwhile, Armie Hammer stepped down from his role on "Shotgun Wedding" alongside Jennifer Lopez.

The 51-year-old singer-actress is said to be "horrified" by the alleged messages.

Armie Hammer has reportedly left the Cayman Islands and checked into a rehab facility in Orlando, Florida. Though the news only got out now, Hammer has been in the in-patient treatment facility since May 31.

Armie Hammer was recently seen in the Cayman Islands for the first time after rape allegations in March.

Armie Hammer doesn't seem to have any ounce of a career left in Hollywood after women accused him of assault.

Armie Hammer Explains Why He’s Leaving ‘The Minutes’ On Broadway

Armie Hammer has been dodged with numerous scandals in the past year after years of a successful Hollywood career.