Gronk mentioned that he would be hitting up the magical place on earth after the biggest NFL game of the year, and he stayed true to his word.

Rob Gronkowski went to Disney World in Orlando, Florida, and TMZ spotted him having a magical time.

The outlet also reported that it's all part of Disney's annual Super Bowl celebration, where they parade the winners around the theme park. But because of COVID-19 and following the safety protocol, they scrapped the parade this year.

Luckily for Gronk, he still got to enjoy the park as a super VIP guest.

In an official post on the Disney blog, Gronk said he would be visiting Walt Disney World on Monday to have a "thrilling afternoon, experiencing some of Disney's most popular attractions."

Gronk was with his family, as per TMZ, and though Brady helped the Tampa Bay Buccaneers win the title, it has been revealed that he will be visiting the park at a later date.

Camille Kostek, Gronkowski's girlfriend, posted a video on her Instagram Stories where the Buccaneers tight end can be seen busy in a lightsaber battle with a boy wearing a Tampa Bay jersey. 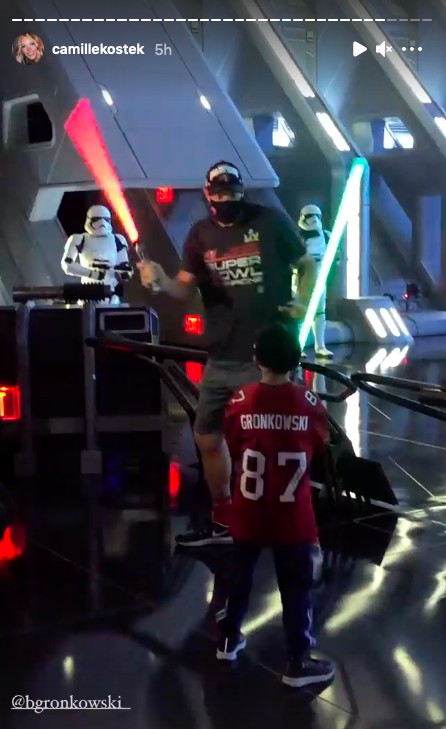 The background shows stormtroopers from the "Star Wars: Rise of the Resistance" ride at Disney World.

Another image posted referred to him as "Uncle Rob."

Disney Parks Blog's Instagram Story also showed the football player on a float with iconic Disney icons such as Mickey Mouse and Minnie Mouse. There was also confetti flying. In the background, Magic Kingdom's Cinderella Castle can be seen.

Disney also released an advertisement that featured the two NFL stars shouting "I'm going to Disney World" from the sidelines.

The ad features the quarterback passing, Gronkowski scoring, front line personnel in the stands, and the voiceover that asks: "What are you doing next?"

Disney's commercial features athletes and other celebrities, including "American Idol" winners. They have been doing this since 1987.

Brady and Gronk connected for two touchdowns during the Buccaneers' 31-9 victory over the defending champions.

The duo previously played for the New England Patriots for nine seasons before Gronk "retired." However, after the quarterback moved to Tampa Bay, Gronk immediately came out of retirement to join the team.