A month after filming wrapped up, Olivia Wilde shared a teaser of her upcoming movie, "Don't Worry Darling."

The movie only had a few months of filming in Los Angeles after a brief halt in production due to the pandemic.

Olivia Wilde posted an Instagram picture of Florence Pugh in the role of Alice, who throws her hands up in surrender in the desert.

She was surrounded by figures who were dressed in red.

Meanwhile, on Instagram Stories, the director also shared another scene with the blonde actress. 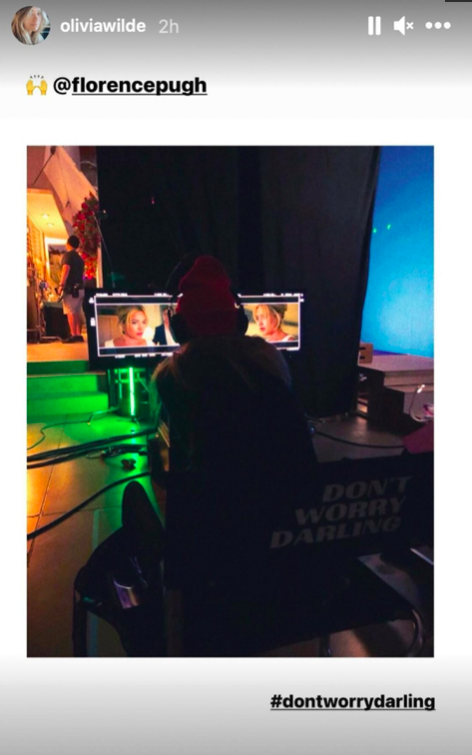 According to the movie's official synopsis, it is about a 1950s housewife living with her husband in a "utopian experimental community." Alice starts to worry that her husband's glamorous company is hiding some disturbing secrets.

Filming started in Los Angeles back in October 2020, and the pair fell in love during production. According to a source who spoke to Us Weekly in January, a few days after the couple was spotted holding hands at a wedding, "Harry and Olivia had chemistry almost instantaneously on set." "It was only a matter of time before they got together," they added. Another insider told the outlet that the Wilde's "intelligence and independent nature" were some of the first few things that drew the "Adore You" hitmaker. "Harry likes that Olivia is so driven, confident, and smart." While the pair hasn't publicly commented on their new romance, Olivia Wilde praised Harry Styles in February after they wrapped up filming.

She said in a lengthy Instagram caption that Styles "relished the opportunity to allow for Pugh to hold center stage as the lead," but he also "infused every scene with a nuanced sense of humanity."

She also added how Styles joined the movie with a "humility and grace" and that everybody was blown away with his talent, warmth, and "ability to drive backward."

There is still no exact release date for "Don't Worry Darling" as of writing.