Olivia Rodrigo has made her mark in the music industry in a manner that can only be called stellar - and she's sharing a few secrets since "Driver's License" got out.

In a chat with RADIO.COM host Julia, the 18-year-old breakthrough artist also shares her insights on the fan-fueled speculations surrounding her hit song. Ever since "Driver's License" hit the airwaves, fans have read between the lines and supposedly found references to a beef involving fellow "High School Musical: The Musical - The Series" stars Sabrina Carpenter and Joshua Bassett. 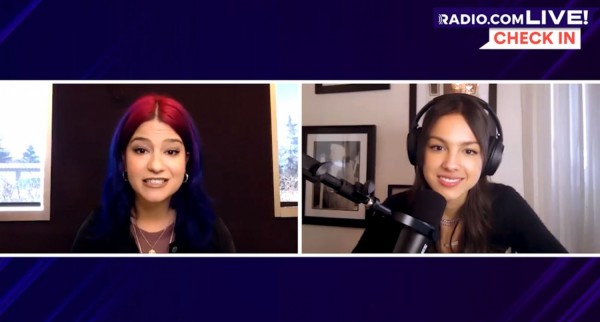 Specifically, eagle-eyed fans spotted the last-minute lyric change: whereas "brunette" appeared in the 2020 teaser, the final version had "blonde" instead, in what was seen as a passing reference to Carpenter.

"And you're probably with that blonde girl / Who always made me doubt / She's so much older than me / She's everything I'm insecure about," Olivia sings, supposedly hinting at Sabrina's hair color and the fact that she's 21-year-old - three years older than the "Driver's License" singer.

Last January, Carpenter released her single "Skin," which was seen by many as a response track. "Maybe we could've been friends / If I met you in another life," Carpenter sings in the track. Another line, "Don't drive yourself insane," was taken as a reference to the Olivia Rodrigo single.

When asked in the RADIO.COM interview whether she would be making a response song to the supposed response song, Olivia answered: "I actually don't know her at all. I think we've met once or twice in passing, but I've never had a conversation with her so, I don't think I could write a song that was meaningful or emotional about somebody that I don't know."

Halfway through the RADIO.COM interview, Olivia Rodrigo shared her celebrity experience following the overwhelming response to her song. She recalled how Lorde and Phoebe Bridgers - two of her favorite artists - reached out to her via social media, expressing their love for "Driver's License."

"It's just so surreal how my idols turn into my peers," Rodrigo added. "It's just insane."

The evening before her RADIO.COM chat with Julia, Olivia shared getting a letter from Taylor Swift herself. After describing the intense feeling she had from the letter, she then went to express how she admired Miss Americana, sharing her favorite lyrics from Taylor Swift songs.

Also, one of the most memorable experiences related to her success is the recent "Driver's License" sketch on the long-running comedy show Saturday Night Live (SNL). She called the sketch - where various casts, including Pete Davidson, were discussing and singing along to the song - "the biggest compliment in the whole world," and additionally reveals that Davidson is among her celebrity crushes.

While she thought that the SNL cast would be mentioning her song, she never thought that it would be the subject of a sketch. "I was, like, absolutely floored, I was screaming," Olivia shared. "It was so surreal."

Tags: snl olivia rodrigo Sabrina Carpenter RADIO.com
© 2021 EnStars.com All rights reserved. Do not reproduce without permission.
Most Popular
You May Also Like

Pete Davidson spoke candidly about his blurry future in the entertainment industry as he struggles with his mental health.

Pete Davidson seemingly dropped a sign that he will be leaving "Saturday Night Live" soon.

John Mulaney starts a new fire with Olivia Munn only a few days after filing for divorce from Anna Marie Tendler, and the internet thinks it is suspicious.

After Elon Musk's debut on "Saturday Night Live," Grimes said she had a panic attack.

Elon Musk made his SNL appearance his platform to reveal his once-top secret health condition.

Chris Rock Bullied: SNL Star Gets Real About Horrible Experience as a Kid

Behind Chris Rock's comedic acts are tragedies that hit him in the past.

It seems like not everybody is laughing at Adele and her scenes on "Saturday Night Live."

It sure looks like Adele is enjoying her new lifestyle, as she even made fun of her weight loss journey during her appearance on "Saturday Night Live."