In a new interview with Kennedy from the "Karson & Kenedy Talk With Famous People" on Mix 104.1, Demi Lovato bared all - from her 2018 overdose to the filming of her latest single "Dancing With The Devil." 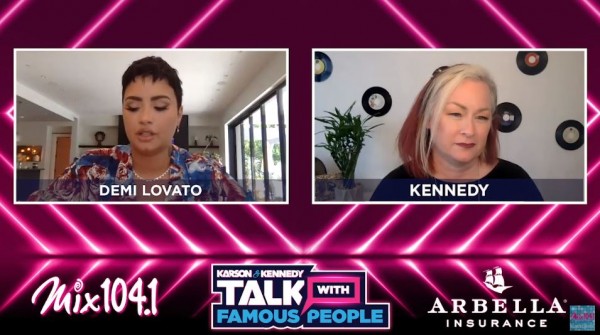 Demi After Overdose: "Life without music is so sad"

Kicking off the Mix 104.1 interview, Kennedy honestly gets to the point, noting the need to go back to July 2018, when Demi Lovato was rushed to the Cedars-Sinai Medical Center in Los Angeles, California, following an opioid overdose. The American singer and actress shared her experiences waking up in the hospital, not knowing where she was and what happened to her. She recalls being blind and hearing how she suffered brain damage from strokes brought about by the incident. Being unable to do anything, Demi revealed that she sat in the hospital for 10 days, thinking "about what am I gonna do, what do I do from here."

She even reached the point where she contemplated whether she ever wants to sing again. However, Demi tells Kennedy, that music was her greatest healer.

"I quickly realized that my life without music is so sad," Demi tells Kennedy. She added that it was also the point at which she recognized the need for help, which she sought for the past few months.

Working on "Dancing With The Devil"

Demi Lovato recently released her seventh studio album, "Dancing with the Devil... the Art of Starting Over," whose release was accompanied by a music video for the title track "Dancing With The Devil," April 2. In her Mix 104.1 interview, the "Skyscraper" singer shared that her latest title track was written also back in November 2018. Explaining her creative process behind the sincere new song, Demi Lovato shared starting with the lyrics, with the experience being "therapeutic" for her. She has sat on the song, keeping it unreleased until recently, because she was waiting for the right time to tell her story.

About filming the music video for "Dancing With The Devil," Kennedy recognizes how revisiting the same tragic experiences could be "a little triggery." Agreeing with the Mix 104.1 host, Demi adds that the experience was really cathartic for her. "I'm really glad, I'm really relieved and grateful that I had that experience," Demi tells Kennedy, adding that when she got into the set for the music video filming.

A Song From Ariana Grande

Also, regarding her new album, Demi Lovato reveals that none of her collaborative tracks - featuring Ariana Grande, Sam Fischer, Noah Cyrus, Saweetie, and more - were done face-to-face, because of the restrictions from the coronavirus pandemic.

She then recalled the story behind her track "Met Him Last Night," which features Ariana Grande who was also among the writers behind the song. Demi adds that Ariana wrote the song for her, who insisted that the "34+35" singer "stay on it" and sing as well.

"You know, that's the kind of women supporting women that we need," Demi shared. She also called Ariana Grande "the biggest pop star in the world," and that she deserves it for helping other women.

"I'm excited to be able to call her a friend and have her on this album," Demi added.

Watch Demi Lovato and Kennedy on Mix 104.1 below:

RELATED ARTICLE: Ariana Grande 'The Voice' Salary: Is She Paid More Than Blake Shelton and Other Judges?

Tags: Demi Lovato RADIO.com celebrity interview Ariana Grande
© 2021 EnStars.com All rights reserved. Do not reproduce without permission.
Most Popular
You May Also Like

Demi Lovato Questioned By Neil deGrasse Tyson Over 'Alien' Remarks; 'I Don't Get It'

Happy birthday, Demi Lovato! But is it really a "happy" one?

Demi Lovato and Noah Cyrus' friendship have finally bloomed into something more.

Demi Lovato and Noah Cyrus were recently spotted holding hands together in a theme park which added more speculation that the two might be dating, how did it started?

Lizzo had been out and about in Los Angeles, catching the attention of nearby paparazzi because of her choice of outfit, which has the one and only singer Demi Lovato.

Demi Lovato is under fire after they appeared to be holding a microphone with a soda brand logo that says 'zero sugar'. This came after the singer shamed a yogurt shop for selling sugar-free items that triggered them.

Demi Lovato recently took to Instagram and announced that they're coming out as non-binary, they also mentioned that they now prefer the pronouns they/them