The drama between Larsa Pippen, her ex-boyfriend Malik Beasley and his on-again, off-again wife Montana Yao is starting to get heated up.

First, it was the NBA player who apologized to his wife, who really appreciated the public apology.

Unfortunately for Larsa Pippen, Montana wasn't so forgiving towards her in her own public apology addressed to her husband.

Montana previously said that the Instagram influencer's threats "are good over here" and that the former wife of Scottie Pippen "wouldn't know girl code if it slapped her in the face," about when Larsa was spotted with Malik while he was still married to Montana.

Referencing to breaking the "girl code," the 46-year-old "The Real Housewives of Miami" alum hit back that "Woman to woman, I would never do that, especially over a man."

She also slammed Montana Yao and her husband, giving them "free press" while clearing up "misinformation." 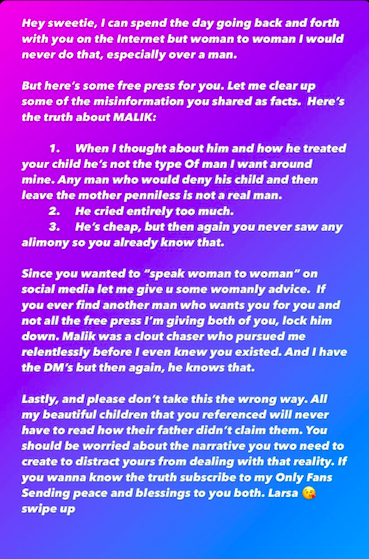 "Any man who would deny his child and then leave the mother penniless is not a real man," Larsa Pippen wrote.

The reality star also made fun of Malik, saying that he "cried entirely too much."

She also called Malik "cheap" and that Montana already knew that because he didn't provide any alimony to her or their kid.

The former BFF of Kim Kardashian claimed that it was the Minnesota Timberwolves played that pursued her "relentlessly" before she even knew that Malik Beasley had a wife.

The 23-year-old responded to her estranged husband and the father of her child a day after the basketball player publicly apologized for ending their relationship and instead pursued the "Real Housewives" alum. 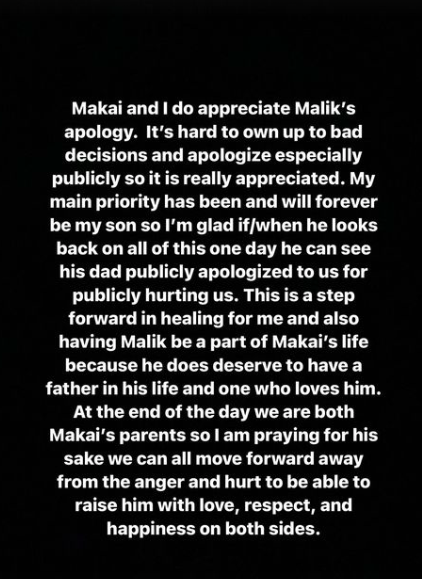 Montana wrote in her Instagram how she appreciated Malik's apology, saying "it's hard to own up to bad decisions."

She also went on to say how she wants to have Malik in their lives with their kid and hopes that they can all finally "move forward away from the anger and hurt" that happened in the past few months.

However, Montana also shouted out to Larsa, saying, "Both of you were wrong as hell but YOU ma'am had the nerve to talk all that s--t to me as if I was wrong?" 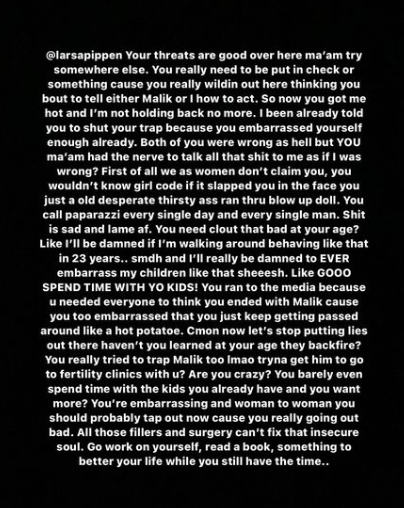 She accused Larsa Pippen of calling the paparazzi "every single day," adding, "You need clout that bad at your age?" 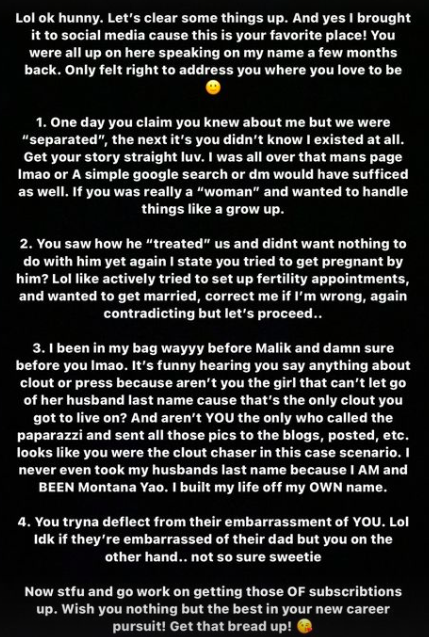 READ MORE: 'American Idol' Finale: Did Arthur Gunn Clash With Sheryl Crow or Was Sabotaged? What Happened to the Supposed Duet?

There have been reports that Larsa Pippen could join "The Real Housewives of Miami," and the reality star sets the record straight.

Larsa Pippen Hints Malik Beasley Can be Her Husband and Baby Daddy?

Larsa Pippen and Malik Beasley are continuing to date despite their very controversial relationship.

LeBron James is backing up the rage of Savannah.

Larsa Pippen set the record straight and revealed the truth about the cheating allegations between her and Malik Beasley.

Los Angeles Lakers star LeBron James stood up for his son, Bronny James, who became the center of attention after liking one of Larsa Pippen's Instagram photos.

No Stopping! Malik Beasley Flirts With Larsa Pippen on IG Amid Drama

Despite the backlash he recently received, NBA player Malik Beasley seems head over heels in love with Larsa Pippen.

After her husband was spotted with Kardashian outcast Larsa Pippen, Montana Yao filed for divorce from her 24-year-old husband, Malik Beasley.

Larsa Pippen Claps Back Amid Cheating Issue With Malik Beasley

Larsa Pippen has a message for those judging her amid her cheating issue with married NBA player Malik Beasley.