I was petrified by Silence of the Lambs. I could not sleep for days after seeing Scream (yes, Scream). I could not even bring myself to finish the CHILDREN'S MOVIE Coraline until my 20th birthday. (I still attest that this is one of the scariest movies ever created in the history of cinema. I've made myself very comfortable on this hill that I will die on). So, suffice it to say, horror movies are not my thing.

I understand the appeal of them...in a way. People like scary movies for the same reason they like roller coasters: there are twists and turns, drops and screams, unexpected terror and elation that kicks your adrenaline up to 500% in a way that you don't normally come across in your daily life. (Quick insert: I do not like roller coasters. Don't I sound like a lot of fun?) The scary movie is the roller coaster of the film world, and I really wish that I could get on. Especially now, with the weather cooling down and Halloween around the corner, I wish I could be the friend that could say, "Hey! Scary movie night at my place!" Alas, however, I am not.

Yet, recently, while interrogating my disfavor for the horror genre, I realized that some of my favorite movies and TV shows are actually horror adjacent. Rather than being drawn towards films filled with blood, gore, and a beautiful blonde girl trying to escape the clutches of an unseen, unpredictable omen, I like films that come from the side of the omen, movies where we get inside their head. Wait, so you're saying you're more comfortable seeing movies from the...murderer's perspective? You hear how that is concerning, right? 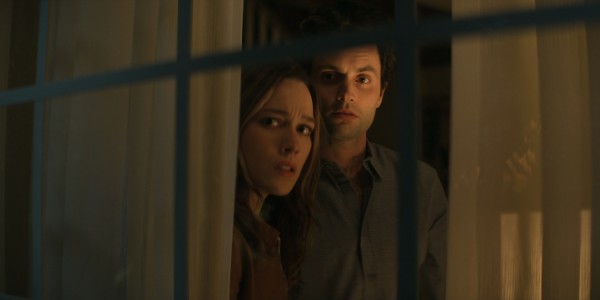 Yes and yes! I do! But those of us who are afraid of jump scares and sneak attacks want a way to join in the Halloween horror movie fun! By coming from the side of the villain, we completely remove terrifying questions like is something going to jump out at me? Instead, we are able to watch through story lines of okay, so that person is going to pop out at that person and do a really bad thing but how on earth will they get away with it they couldn't possibly get away with it oh look oh no are they getting away with it?

FINE. IT'S STRANGE. I GET IT! But I know I'm not alone. Therefore, I have declared this publicly on the internet so that others don't have to. Here is a list of eight movies and TV shows you should watch this spooky season if you're in the market for a creepy anti-hero movie!

It's hard to get any further into the mind of a villain then when watching You. The hit series, which just released their third season on October 15th, follows the life of stalker, obsessive, murderer Joe Goldberg, played by Penn Badgely, as he finds himself caught in an endless wheel of crimes and covering up for crimes. While the show is unapologetically creepy, filled with the sort of invasive, spine chilling deeds that make your skin crawl, it is a perfect thriller for those that hate jump scares. We see Joe trying his very best to be a good father, but murder just seems to follow him wherever he goes. Oh welp. It's downright quirky! (I'm fully kidding, it's really not quirky at all, but literally go watch this show).

However, if we are going to talk about quirky murder, I would point you in the direction of the 1980s cult classic Heathers. The movie starts rather innocently, as all murders do, with a quirky little accidental poisoning (whoops!). After Veronica, played by Winona Ryder, and her boyfriend J.D., played by Christian Slater, manage to pass off their accidental murder as a suicide, the path they take from there is somewhat less...accidental. Also, that 80s movie feel always adds a fun Halloween-ish layer!

Thoroughbreds is an unsung, should-be-a-classic, anti-hero film. Two high schoolers, played by Olivia Cooke and Anya Taylor Joy, set out to kill Joy's stepfather. It is creepy and calculating and the PERFECT film to watch if you want to be shocked without being scared to weeks of sleepless nights. The movie perfectly gets you inside the heads of these two girls and lets you follow them along their cold and crime-attempting journey.

"ATTEND THE TALE OF SWEENEY TODD," because you should make absolutely sure that you are catching Tim Burton's adaptation of the classic horror musical this Halloween season. See Johnny Depp and Helena Bonham Carter take on the terrifying roles of Sweeney Todd and Mrs. Lovett in the deadliest hair cuts you have ever seen and wonder how long they could possibly continue getting away with it. Also, it's a musical!! You can't get THAT scared watching a musical (famous last words, I know).

Nightcrawler is the story of a news cameraman, played by Jake Gyllenhaal, who will do anything to get footage of a story. Like, anything. No, seriously, ANYTHING. This movie is the perfect combination of plucky reporter energy with crime, murder, mystery, and poor decision making. Nothing says Halloween like an ambitious and professional take on crime!

6. Interview with a Vampire (Apple TV+)

Who doesn't love a vampire movie? After watching Twilight one hundred thousand times, why not check out Interview with a Vampire. This movie, based on the horror novel by Anne Rice. Louis de Pointe du Lac, a vampire, recounts his story of bloodsucking crime, family troubles, and drama to a reporter. The vampire is played by Brad Pitt. There is also a television remake of Interview with a Vampire coming out soon, so you are going to want to watch the original first!

One of the newest and most telling villain origin stories should definitely make your watch list this October. Joker, starring Joaquin Phoenix, chronicles the dissent of the iconic villain into the menace that he becomes. After the trials and the tribulations faced by Arthur Fleck, the man who becomes the joker, his metamorphosis into the joker becomes terrifyingly understandable, in a leave that will leave you horrified (but still able to sleep at night) at the end of it. This is a view-from-the-villain's side that you won't want to miss.

Business professional by day, serial killer by night. Just like Kim Possible (just plus all the murders...also, she was a cheerleader by day...). American Psycho is the perfect film for those that want to be scared by a movie but not shocked. Christian Bale expertly takes on the role of Patrick Bateman, bringing us through his double-life murder spree through the lens of comedy. (Because, isn't that what it's all about? Comedy?)

If straight horror movies aren't your thing, but you still have some massive Halloween horror movie related FOMO, those are the movies for you! Go get planning!

Tags: you Joker heathers Thoroughbreds Nightcrawler Sweeney Todd american psycho Interview with a Vampire
© 2022 EnStars.com All rights reserved. Do not reproduce without permission.
Most Popular
You May Also Like