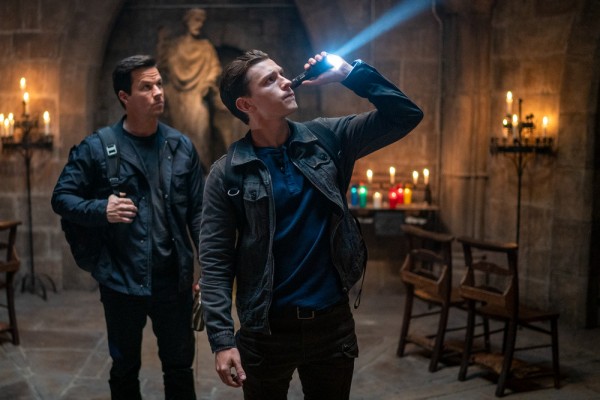 Sony dropped the highly-anticipated "Uncharted" trailer today, and fans today finally got a first glimpse of Tom Holland as famed adventurer Nathan Drake. Based off the popular video game series created by Amy Hennig and developed by Naughty Dog, the "Uncharted" film adaptation has been in development since way back in 2008.

In the trailer, we see Holland's Nathan Drake pull off a variety of death-defying stunts in exotic locales, such as a subterranean cave and the rooftops of a beautiful European city. Drake, a young bartender, meets Mark Wahlberg's Victor "Sully" Sullivan, and impresses him with his in-depth knowledge of history and desire to explore places that aren't on the map. The trailer promises adventures and action set pieces reminiscent of the "Indiana Jones" and "Tomb Raider" movie series.

The Spider-Man No Way Home actor posted the trailer on his Instagram page writing, "Thought I'd just leave this here. Trust me when I say you ain't ready for this movie. @markwahlberg and I are gonna take you a huge adventure. Uncharted is yours to enjoy on February 18th."

"Uncharted" is a video game series with four installments in its main series that started with 2007's "Uncharted: Drake's Fortune." A major critical and commercial success, the games have sold over 41 million copies worldwide, cementing "Uncharted" as one of the best selling video game franchises of all time. The series has been praised for its high production values and quality storytelling, evocative of big-budget Hollywood action-adventure films.

"Uncharted" is set for an exclusive theater release on February 18, 2021. Check out Enstarz for more coverage of your favorite celebrities, TV shows, and films.

Tags: Tom Holland Mark Wahlberg Uncharted
© 2021 EnStars.com All rights reserved. Do not reproduce without permission.
Most Popular
You May Also Like

Producer Amy Pascal has said in the past that she would never make Spider-Man movies without Tom Holland, but Holland has said he wants to move on before he's 30 - which throws Pascal's promise of another trilogy into question.

Andrew Garfield Still Swears He's Not In 'Spider-Man: Homecoming' But He Looks So Good In These GQ Pics We'll Forgive Him

The actor did not want to talk to GQ about the new Spider-Man movie, but he did tell the story of the time Lin Manuel Miranda threw a shoe at him while they were working on 'Tick, Tick... Boom!'

At Long Last, The New 'Spider-Man: No Way Home' Trailer Has Dropped

Spider-Man is unmasked and ready to be seen in his newest film Spider-Man: No Way Home. This upcoming film starring Tom Holland as Spider-Man adds an even more detailed nuance and complexity to the cannon of Spider-Man.

The Latest 'Spider-Man: No Way Home' Poster Is Full Of Villainous Easter Eggs For Fans! See It for Yourself Now

Poster For Spider-Man: No Way Home Showcases Villains Past And Present, If You Know Where To Look.