These Were The 8 Best Dressed Celebrities At The 2021 EMAs

This Sunday marked the the return of the annual MTV European Music Awards, and this year's nominees and guests came dressed to the nines as usual. From big winning stars like Saweetie to actors like Taika Waititi and Rita Ora, everyone tends to go somewhat wild for the fashion at MTV events, so there was a lot to see on the Red Carpet.

That said, a fave is a fave, and we do DEFINITELY have our faves from this time around, so without further ado: Here are Enstarz's eight picks for best dressed celebs at the 2021 EMAs (in no particular order, of course, because how the heck could we choose?) 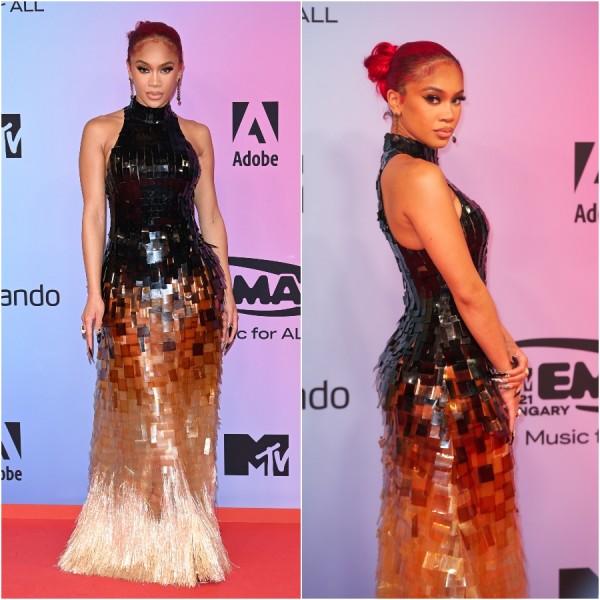 First and foremost: We'd be remiss if we didn't mention hip hop artist and gracious host Saweetie's fabulous sepia-tone disco-ball-style gown, which she looked absolutely stunning in as she waltzed onto the red carpet ahead of hosting and performing (and winning the award for Best New Artist, nbd.) The star sported 11 different outfits last night - including one inspired by Squid Game! 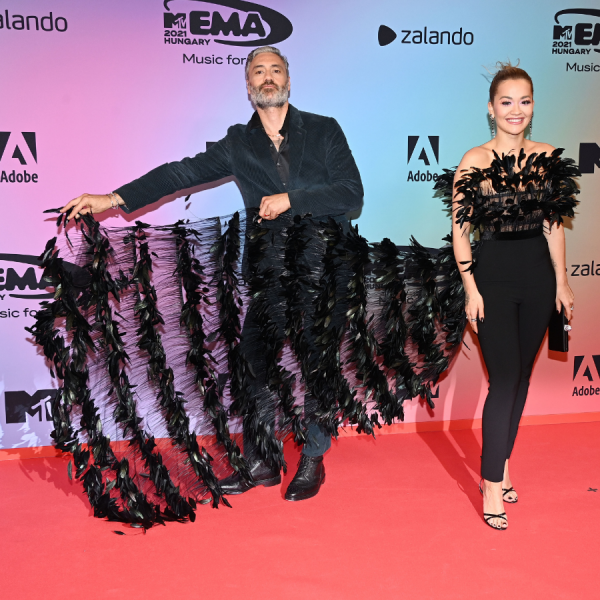 Rita Ora has impeccable style - she made our last red carpet list too, for the stunning white gown she wore to the Marvel Eternals premiere. She was also flanked then, as now, by her doting boyfriend, director Taika Waititi, and it looks like he's taking the Red Carpet BF job with the utmost seriousness (and enjoyment - look at the pride on his face!) 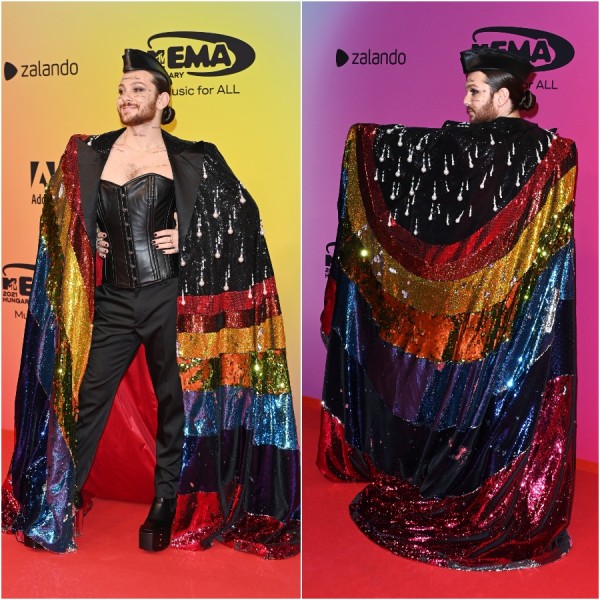 SPEAKING of Pride, German entertainer Riccardo Simonetti went all out with his, sporting a sequined rainbow flag cape with ornamental beads that looked like raindrops, as well as platform boots and a corset. The 2020 winner of the E! PCA for German Personality of 2020 also sported a sleek black hat and a slicked back bun.

Simonetti is best known in Germany for (you guessed it!) his work bringing LGBTQ+ issues to the forefront of conversation, including three published books on the subject. Before that, he ran a popular blog. 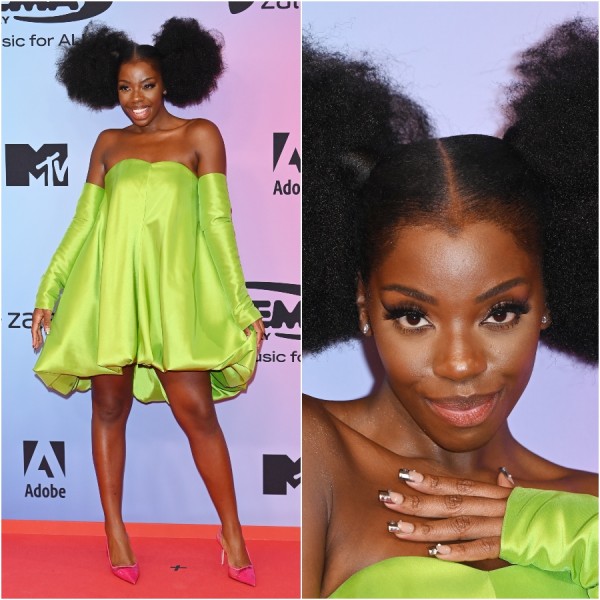 Noted dancer and choreographer Jenny Bsg looked like the fiercest babydoll we've ever seen in her bright green bubble dress and pink heels, with two giant poufs on the side of her head. Her metallic manicure was also a fantastic touch.

The most notable thing about her, though, is that she looked radiant - a far cry from how she looked back in October, when she shocked Belgium with an image of her swollen face in order to speak out about domestic violence and against her now ex-boyfriend, a comedian known as "Doctor Ideology." 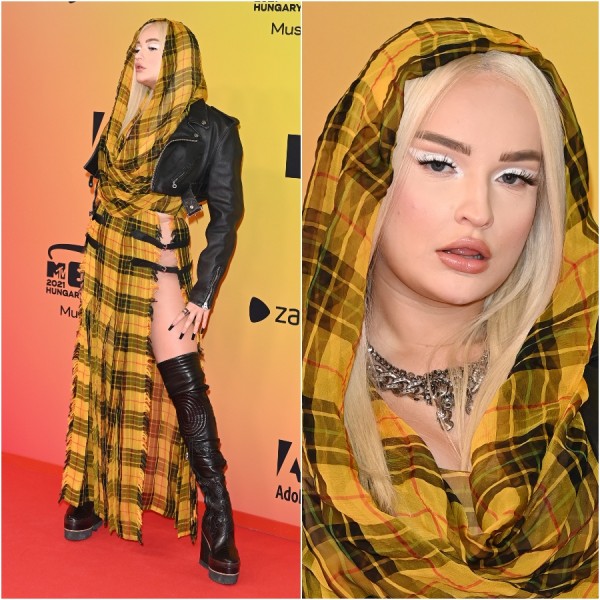 German-born singer Kim Petras has garnered a lot of attention in the US media since moving to LA, and she's definitely earning it on the Red Carpet: The hooded, kilt-like dress she wore with thigh-high boots and leather jacket was quite a statement, as is her dramatic white eyeliner.

Petras performed her songs "Coconuts" and "Hit It From The Back" at the awards last night. 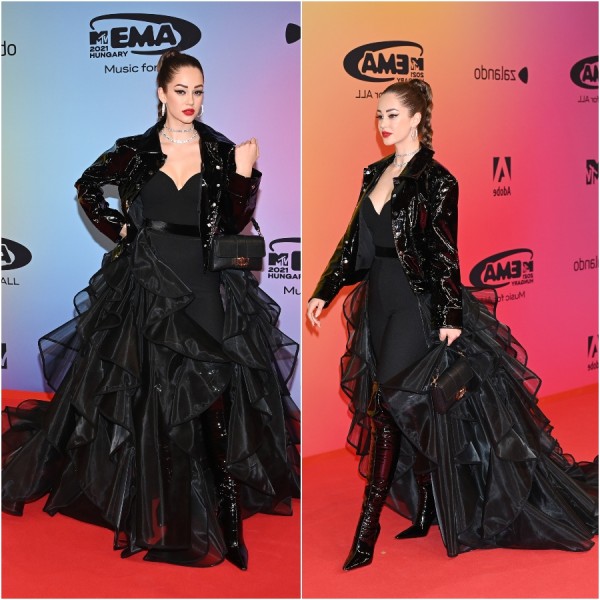 Slovenian Singer Gaja Prestor positively stole the show last night, strolling onto the Red Carpet in thigh high boots and a black bodysuit elegantly accented with a dramatic black skirt and a leather jacket. Ladies (and gents, you can wear skirts too), all of you who have dreamed of towing the line between comfort and high, dramatic fashion, dream no more: Prestor has done it. 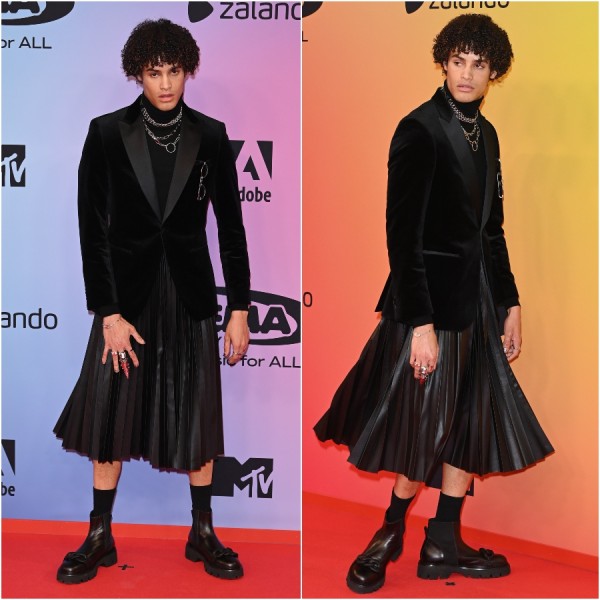 AND SPEAKING OF GENTS IN SKIRTS - French model William Ernult joined the number of stars pushing the gender binary this year as he sported a luxurious velvet sport coat with a shiny accordian-pleated skirt, with black boots and socks to match. He even accented it with some carefully chosen silver chains to complete the look. 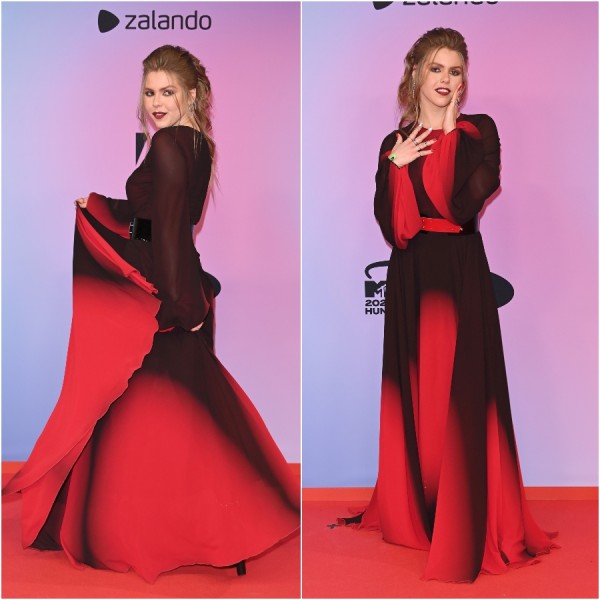 Last but not least, Hungarian social media star Lady Szomjas (AKA Jennifer Szomjas) was a vision in red and black last night in this sweeping gown, whose pattern created fun and eye-bending illusions as she walked. Her multicolored nails were still coordinated with her outfit, and her hair was also very dramatic, done in a half-up style reminiscent of Belle in Beauty and the Beast.

Tags: saweetie Rita Ora Taika Waititi Kim Petras
© 2021 EnStars.com All rights reserved. Do not reproduce without permission.
Most Popular
You May Also Like

Speculations were raised after reports say that Saweetie already found her new bae after breaking up with Quavo last March, and that seemed to be Lil Baby.

Here are eight of the best Saturday Night Live Thanksgiving sketches of all time.

Damson Idris Learns Piano From Saweetie In Adorable Instagram Video... But Are They Dating Tho?!?

Both the 'Snowfall' actor and the 'Best Friend' rapper posted the same video to their Instagram stories - a video of Saweetie playing piano that Idris captioned 'My Teacher' - sparking dating rumors between the pair.

Tyra Banks is experimenting on so many different looks even before joining "Dancing With the Stars." After all, she is a supermodel.

Rapper Saweetie was one of the best dressed at the Met Gala in an outfit designed in just 24 hours.

Are Saweetie And Quavo Back Together After 5 Months of Break Up? Source Reveals Real Score

There have been speculations regarding Quavo and Saweetie "quietly" spending time together again after they publicly broke up after five months.

Saweetie Net Worth 2021 vs Quavo and Past Boyfriends: Who's the Richest She's Ever Dated?