The Hollywood premiere of Marvel's next movie, Eternals, happened last night, and the star-studded cast - plus a few random celebrity guests - really turned heads. None, however, deserved quite as much attention as actor Kumail Nanjiani. Why?

Because his mom helped him with his outfit, and that is the SWEETEST THING I'VE EVER HEARD. 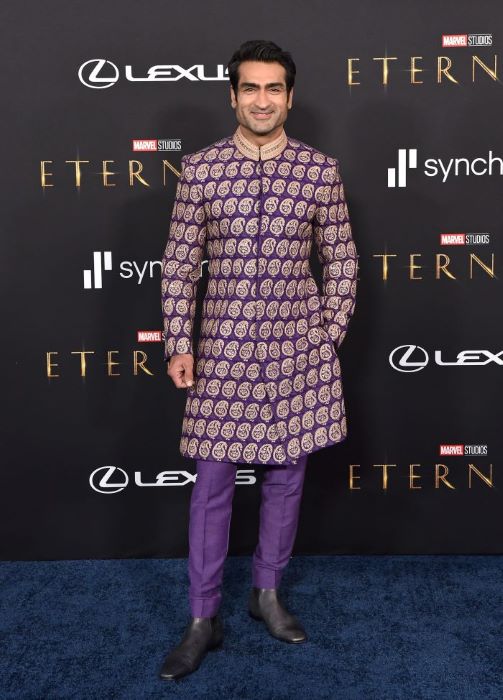 It gets better though, because the reason he asked his mom was to pay a proper tribute to their Pakistani heritage. As he told the Hollywood Reporter:

"I wanted to wear a Sherwani because 1. They look awesome and 2. My costume in the film always reminded me of Sherwanis. And I wanted to use a designer in Pakistan, not just a Pakistani designer in the U.S. So I called my mom, she gave me names of three amazing designers in Pakistan."

"I wanted the colors to be similar to my costume colors, and purple and gold are a beautiful combination. The paisley pattern is very traditional as well."

Nanjiani plays Kingo in the upcoming film, a superhero with powers fueled by cosmic energy, who assumes the identity of a Bollywood star.

Of course, Nanjiani wasn't the only celeb at the premiere with an absolutely killer look. He gets top props, but here are eight others who were serving style last night: 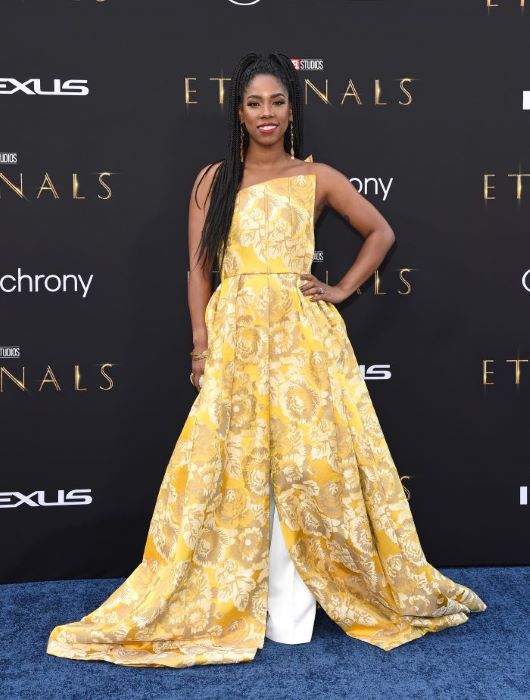 Krystina Arielle, the actress set to host Star Wars: High Republic, a new series premering exclusively on the Star Wars website, looked classic and stunning in a yellow floral ballgown with an angled, strapless top. Of course, given that she was known mostly as a cosplayer before she got picked to host this new show, the fact that she makes this list is not at all surprising. 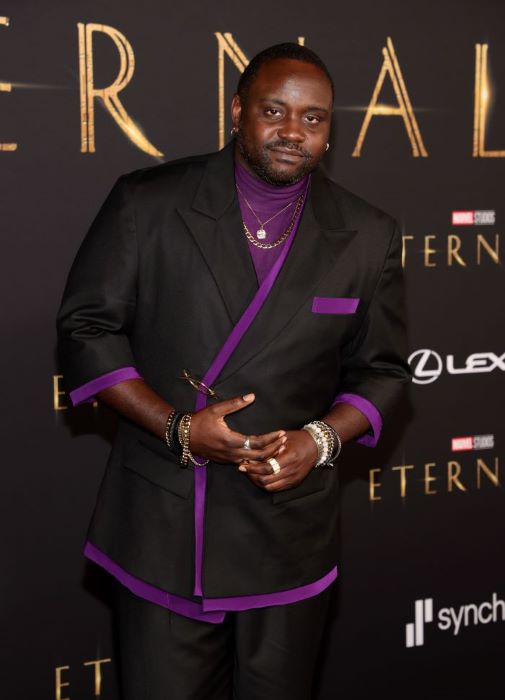 Brian Tyree Henry was another amazing look, going with a simpler sort of formality with this black suit with bright purple lining. The 3/4 length sleeves accentuate his blinged-out wrists, contributing to the simple elegance of his outfit.

Henry will play Phastos, Marvel's first openly gay superhero (FINALLY.), who is married with a child. 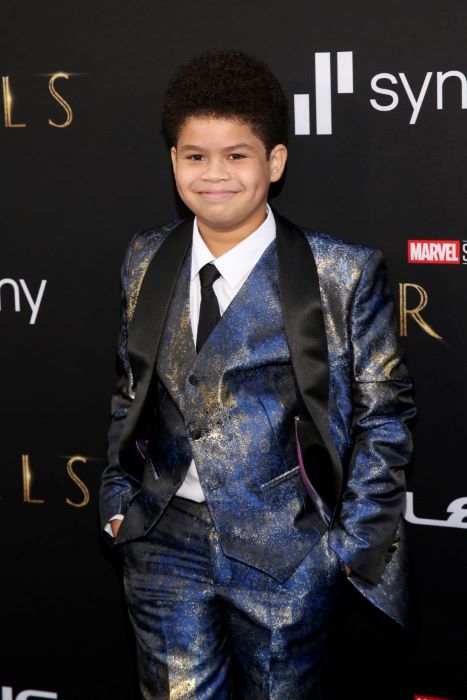 Young actor Esai Daniel Cross doesn't have any credits listed on his IMDb page, and it's not clear who he's playing in the movie, but given that he was hanging close to Brian Tyree Henry on the Red Carpet, we're betting he'll be playing Phastos' son. We're also betting that this kid is gonna be one to watch in the style department - that sparkly gold brushed suit is a work of art! 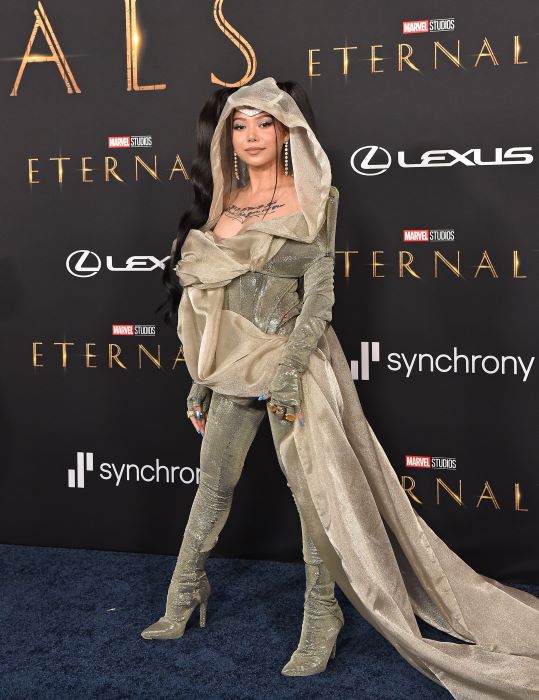 Here's a Look with a Capital L - early TikTok star Bella Poarch showed up wearing a hooded...something...we don't know what to call it, but it looks really cool! 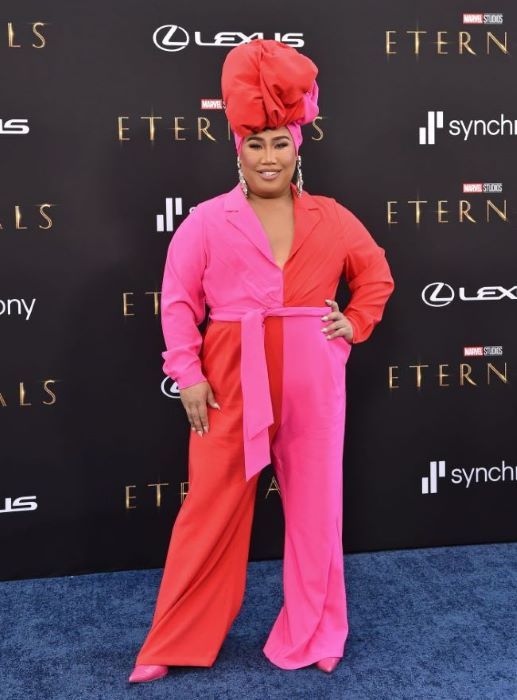 Musician and makeup guru Patrick Starr was also at the event, standing out and looking fierce in a red and pink jumpsuit, pointed heels, and a large headdress to match. The singer's large earrings completed the fun look. 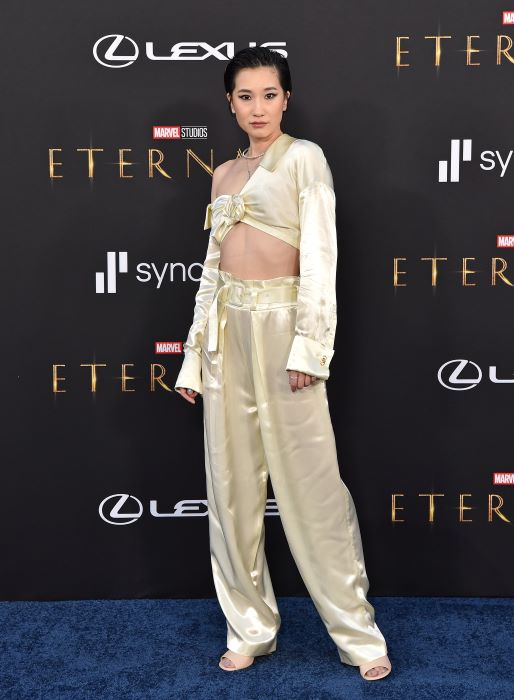 Chinese-born actress Meng'er Zhang, who played Xialing in Shang-Chi, kept things formal and fresh in a cream-colored two-piece pantsuit with an uneven tie-off top, the color and material she chose dressing up what would otherwise be a more casual look. 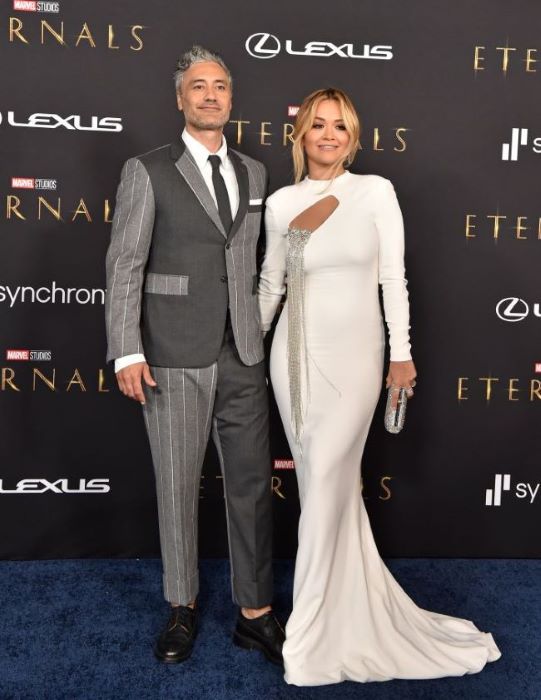 Rita Ora, who looked stunning in a simple white gown with mettallic tassels descending from a cutout on the chest, poses here with writer and directer Taika Waititi, who is serving looks of his own in a two-tone, two-pattern suit (with no socks!) These two together make quite a pair. 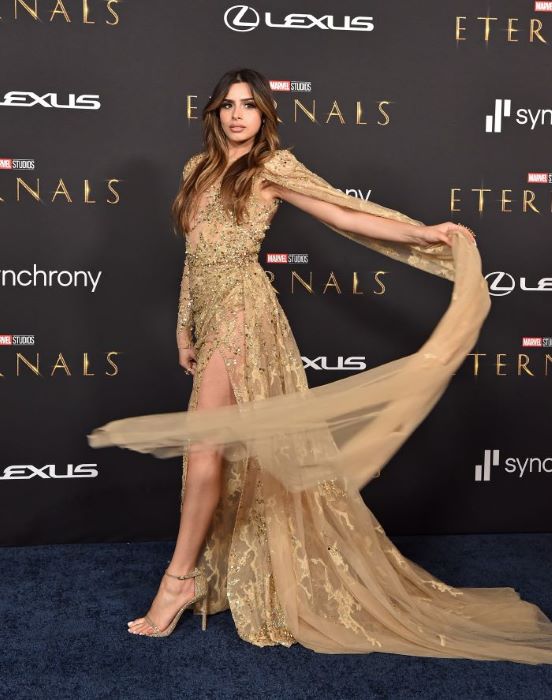 Last but not least, Celina Sharma, whose song will appear on the Eternals' soundtrack, definitely stole the show in this glamourous lace champagne-color ballgown with matching shoes. That dramatic swish of the arm? Unbeatable. 10/10.

Tags: kumail nanjiani meng'er zhang Rita Ora Taika Waititi
© 2021 EnStars.com All rights reserved. Do not reproduce without permission.
Most Popular
You May Also Like

"Look What You Did!" Kumail Nanjiani Ecstatic As He Congratulates "Eternals" Co-Star Lauren Ridloff On Inspiring People Around the World to Learn Sign Language

Earlier today, Kumail Nanjiani, one of the stars of the latest MCU film "Eternals," congratulated his co-star Lauren Ridloff on galvanizing a global interest in sign language due to her role as the first deaf superhero portrayed on the big screen. The two are part of a star-studded ensemble cast that includes the likes of Angelina Jolie, Gemma Chan, Richard Madden, Salma Hayek, Bryan Tyree Henry, and Barry Keoghan.

In preparation for his role in Marvel's "The Eternals," 41-year-old comedian and actor Kumail Nanjiani has revealed his impressive physique on Instagram.