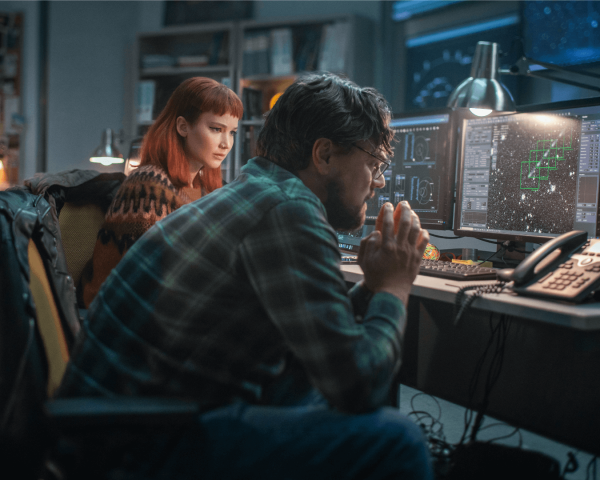 In the trailer, DiCaprio's Dr. Randall Mindy and his partner, Lawrence's Kate Dibiasky, attempt to warn the government about Earth's impending doom, only to be told to "sit tight and assess." The two low-level astronomers decide that the only way to save humanity is to release the news via media tour, but only to find that the media personalities, celebrities, and ordinary citizens of the world don't seem to grasp the seriousness of the situation. This satirical take on a doomsday story is based on what would happen should such a situation arise in American society, or as the trailer puts it, "Based on real events...that haven't happened...yet."

Written and directed by Adam McKay, "Don't Look Up" is the latest in McKay's stylish brand of satire, and is a biting commentary on the 24-hour news cycle and our inability to focus on the serious matters that threaten our survival. You may recognize his style from McKay's other notable films, "Anchorman," "Talladega Nights," and the Academy-award nominated "Vice," the Dick Cheney biopic.

"Don't Look Up" will be released on Netflix and select theaters on December 24, 2021. For more entertainment news and commentary, follow Enstarz! We bring you the latest on your favorite celebrities, TV shows, and films.

Tags: dont look up Leonardo DiCaprio Jennifer Lawrence Adam McKay netflix
© 2021 EnStars.com All rights reserved. Do not reproduce without permission.
Most Popular
You May Also Like

Jennifer Lawrence Set to Star in THIS Netflix Comedy Film

It looks like Jennifer Lawrence is trying to explore her craft in more ways than her fans would have imagined.