Red Notice is absolutely unstoppable. The action film starring Ryan Reynolds, Gal Gadot, and Dwayne "The Rock" Johnson has scored the top streaming spot for the third week in a row on Netflix. With, according to data acquired on November 28th, 328.8 million hours spent streaming, the hilarious art thief film has replaced Sandra Bullock's Bird Box as the number one top streamed movie on the streaming site. There is just something about an on-screen heist film, especially one starring three of the biggest stars in Hollywood today, that people can't seem to get enough of! Ultimately, we'd be surprised if you were surprised.

One of the main reasons that Red Notice has been such a smash-hit is the undeniable chemistry between the three leads. In an interview with Firstpost, Reynolds pointed out that chemistry is absolutely critical to the success of any film.

If you don't have that, you're screwed. Gal, Dwayne, and I are pretty lucky we have that. It's not something you can invent. You have actors who aren't necessarily trying to win a scene as much as they're trying to play. Dwayne is very good at listening in scenes. I love to listen in scenes, and Gal does that too. So I think that's why we're very good at it when we're performing. More than a buddy comedy, this is like a proper three-hander. You're really trying to shine a light on each character. They each have an arc, a moment. 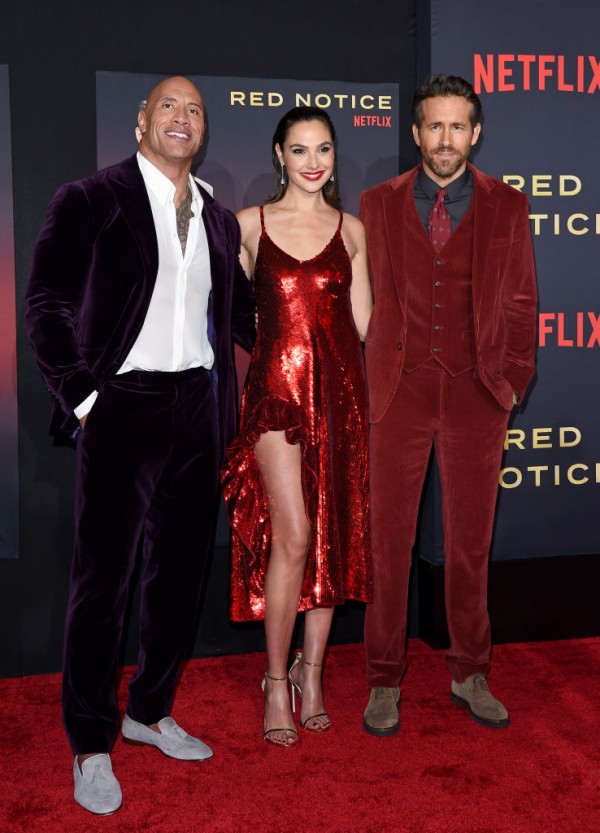 If you haven't seen Red Notice yet, be sure to check it out now!

Tags: Ryan Reynolds Gal Gadot Dwayne "The Rock" Johnson Dwayne Jonson
© 2022 EnStars.com All rights reserved. Do not reproduce without permission.
Most Popular
You May Also Like

No Ifs, Ands, or Butts! From Ryan Reynolds to Will Smith: The Butt is Being Overused in Hollywood and It's Getting Ass-inine!

Hollywood is overusing the bare butt, and it needs to stop.

Actress and legend Betty White was found dead in her home this morning, according to TMZ.

Ryan Reynolds Bad Hygiene: Not Taking On New Projects And Staying Home Taking A Toll On His Life?

Ryan Reynolds is rumored to have irritated his wife, Blake Lively.

Reynolds describes White as "a typical Capricorn. Sleeps all day. Out all night boozing and snacking on men."

Speculations believe that Ryan Reynolds and Blake Lively are on the brink of divorce after multiple feuds, compared to what people see them with their "perfect marriage."

Ryan Reynolds Isn't Going To Tell His Pizza Place He's Not Ben Affleck, Are You Kidding?!

Would YOU?! He'd never be able to go there again!

Betty White is celebrating turning 100 on January 17, with a movie about her illustrious career, shown in select theaters for one night only.