"The Simone Biles net worth total of $2.1 million has grown 1000% in 2016 from gigantic endorsement deals built on her gymnastics fame and excellence," Money Nation explained to readers earlier this week. "Just three years ago in 2013, Biles had a net worth of only $60,000. Even last year in 2015 her total wealth was shy of $300,000 and came almost entirely from gold medals won in world gymnastics competitions."

"Biles has racked up over $4 million in endorsement deals with huge companies like Nike, Kellogg’s, Hershey’s and Procter & Gamble and has started her own gymnastics equipment and clothing lines," the outlet continued. "She has taken an entirely different path than swimming star Katie Ledecky, who can’t sign endorsement contracts because of strict NCAA rules."

Biles didn't have the easiest childhood. After being born to parents who could not raise her, Biles, whose mother was addicted to drugs and alcohol, was adopted by her grandparents along with her sister.

Despite the challenges, Biles has come off on top and is often referred to as the World's Greatest Gymnast.

Last night, after finishing her floor routine, Biles was awarded with the All-Around gold medal and at her side on the podium was her fellow U.S. gymnast, Aly Raisman.

Check out more of Simone Biles below. 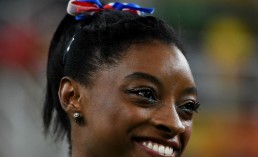 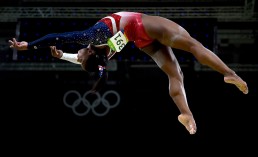 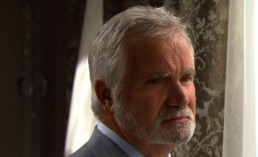 'Bold and the Beautiful' (B&B) Spoilers: Eric Makes A Decision About His Future With Quinn [VIDEO]