Usain Bolt has already won his third gold medal in the 100m men's final, but he has some competition when it comes to the 200m final tonight-though he isn't letting that stop him from having some fun with his biggest competitor for the Gold medal, Canadian Andre De Grasse.

The two were racing in the semi-final round yesterday when Bolt appeared to notice that De Grasse, who took bronze in the 100, was gaining on him and threatening to pass him. The moment caused Bolt to smile and speed up, edging out his competitor at the finish line. He then turned around and wagged a finger at De Grasse as if to say "Not yet."

The two men then embraced, laughed and walked back to the locker room together, showing that there is definite camaraderie between them.

The two then later spoke about their race, with both admitting that De Grasse was just trying to push Bolt to prove that he has it in him to also be a three-time reigning champ for the 200m in addition to the 100m.

"I don't think he expected me to do that," De Grasse said. "I had to push him a little bit, you know, see what he has left in the tank."

"He was supposed to slow down. I said: 'What are you doing?' It's a semifinal.' But I think he wanted to push me," Bolt added.

However, despite being friendly with one another, the two men will have to face one another during the final heat for the event, and if De Grasse decides to try and beat Bolt again, he could unseat the champ by getting the Gold medal-unless Bolt turns up the speed once again, and proves he's still the fastest man in the world. 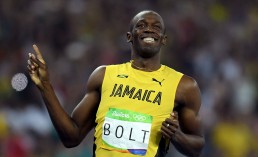 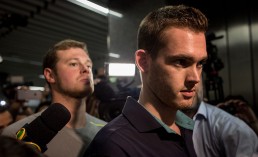 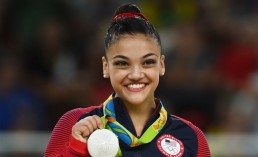 Laurie Hernandez Net Worth: Brands Are Lining Up To Work With Olympic Gymnast [VIDEO]