Caitlyn Jenner followers were struck that she had a new woman with her in Malibu, California, last Sunday on February 26. She did appear to be having a good time shopping and running around the areas with her woman friend.The earlier "Keeping Up With The Kardashians" star did seem to be head over heels with her friend - and even appeared to be on the receiving end.

Caitlyn Jenner had been earlier observed with another woman friend, Candis Cayne. In her show, "I Am Cait," both the women had shared a kiss on screen last year. But later, Caitlyn had clarified that they had merely been "friends." There had also been reports that Caitlyn Jenner had been living it up with model Andreja Pejic at the Oscars, although that was debunked by Gossip Cop.

Caitlyn Jenner is probably trying to build up her relationship with her new girlfriend again, according to x17. The last time it had happened was in 2013, when she had been married to Kris Jenner. But since then, she has been feeling lonely. Sources say that she feels lonely, and is trying to get back to some strong relationships. She is desperate to give love another try.

However, marriage is not on her radar at present. In one episode of "I Am Cait," Caitlyn Jenner said: "To be honest with you, I can't see myself dating women in the future. I've been there done that. I've got three very strong ex-wives. I just don't see it." She certainly does not want to give her marriage a fourth attempt.

So far, Caitlyn Jenner has hooked up with "pushy, dominating and fame-hungry" wives, like her last one, Kris Jenner. This time she wants someone who is not remotely like that, so the new mystery woman seems to fit the bill, as she is not in the least pushy. However, will Caitlyn Jenner get the love she has been longing for? Moreover, she has clarified that she is also open to relationships with men. She has never commented about her relationships or partners, so the door is wide open for a number of speculations, if not wives, at least. 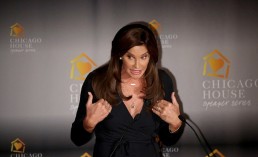