If anyone is summer ready, it is definitely Tamar Braxton.

The My Man singer flaunted her bikini bod on social media while sporting many colorful bikinis.

While on vacation with her husband, Vincent Herbert, and her son, Logan, the singer flooded everyone’s timelines with bikini photos and seductive selfies.

However, there has been speculation that Braxton used Photoshop to enhance her body in the right places.

“I guess the video of her flat, abby stomach is photoshopped also, right? clearly a filter & not photoshop. Learn the difference since y’all so concerned,” a fan wrote in defense of Braxton.

“She Slaying That Body. What did you do to get that flat tummy? I need my flat tummy back you look great. Thank u miss Braxton for showing what a hottie with a natural body looks like. I mean no implants. Nothing at all wrong with implants!!!! But I feel media only shows one side of beauty. Again no shade at all toward women with implants (hell I may get some one day) but ur natural God given hotness is noted and needs to be appreciated. Yasss!” a supporter said.

Despite Photoshop rumors and criticism of plastic surgery, the former The Real host received a lot of compliments and praise.

“Pink is your color it’s beautiful on your skin. You go, Tamar. I bought the same bathing suit from H&M!!!! Same color too!!! Luv luv luv it on you Ty TY!!” a fan commented.

Clearly, Braxton isn’t phased by the hate or speculations and she is making it known to all of her followers. She did not respond to any negative comments, instead, she posted more photos of her physique all over Instagram.

However, there has been some serious speculation that Braxton recently threw shade at her longtime friend, Tiny Harris. The drama between the two recently came to a close once Braxton apologized to Harris for meddling with her relationship with her estranged husband, T.I.

Although, just last week Braxton posted a photo on Instagram throwing subs at women who search for “attention from men.”

“Getting the attention of a man don’t make you a winner.Getting attention because you are already a winner makes [you] a winner. F.Y.I #don’t be a highway sis,” she wrote in the caption of the photo.

It has not been confirmed whether or not the post was directed toward Tiny, especially since she has been attempting to fix her marriage. T.I. took Tiny to a romantic vacation where they were seen getting rather cozy. Prior to this, the rapper dedicated a sentimental slideshow for Tiny on the day of her birthday, July 14.

It seemed too coincidental for Braxton to make that post, especially during the time that T.I. gave Tiny a whole lot of attention for her birthday. Could it be that Braxton is jealous? 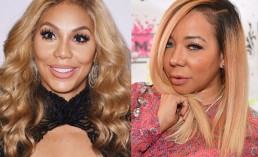 'The Real' Cast: Did Tamera Mowry Shade Tamar Braxton For Getting 'The Axe'?' [VIDEO]