The year 2017 had its fair share of surprise engagements, shocking scandals, and devastating breakups that will probably be talked about in the years to come. Even though we only have a few days shy of the new year, there's no harm in looking back at the most talked about moments from 2017.

Google released the most searched celebrities, films, breakups, and scandals of 2017.

Here are some of the people who made the cut.

The former Suits actress began to make headlines when it was reported that she was dating Prince Harry. The Royal Britain, who is fifth-in-line to the throne, and Markle began dating back in 2016. It was assumed that eventually, the Prince would make Markle a Princess, and indeed, it happened. On Nov. 27th, their engagement was announced and Markle quickly became the top priority on every media outlet's list, which is why the future Princess is the second most searched celebrity of 2017.

Landing the number three spot is the disgraced movie mogul, Harvey Weinstein. Weinstein, who was once a celebrated Producer, came under fire after 80 women accused him of sexual assault, rape, and harassment. The epidemic created the "Weinstein Effect", which led to more men in Hollywood being accused of sexual misconduct. Among those who were accused are Dustin Hoffman, Sylvester Stallone, Russell Simmons, and Brett Ratner. Weinstein has since removed himself from the spotlight and is seeking help for his "sex addiction."

Another shocking and disturbing scandal was the termination of former NBC Today Show anchorman Matt Lauer. His dismissal, which blindsided everyone, was announced by his former co-host Hoda Kotb and Savannah Guthrie. Following their announcement, Andrew Lack, chairman for NBC, gave an official statement that Lauer's termination resulted from a sexual harassment claim made by a female colleague. Since then, three more women have spoken against Lauer, with one claiming the two were engaged in a torrid affair. Lauer has not completely owned up to the allegations but did issue an apology to his family, friends, and co-workers. Lauer's scandal made him the number one searched celebrity of 2017.

Landing the number five spot is another Hollywood giant. Kevin Spacey became entangled in the "Weinstein Effect" after he was accused by actor Anthony Rapp of sexual harassment when Rapp was a teenager. Spacey apologized for his behavior and also used the opportunity to announce he was a gay man. The announcement was met with poor reception and harsh backlash. More men began to come forward and publicly accuse the star of inappropriate behavior such as groping, indecent exposure, and harassment. Spacey was fired from the hit Netflix show, House of Cards, and has entered a rehab center for treatment and evaluation.

For the most searched celebrity break-up, the shocking, yet devastating split of Chris Pine and Anna Faris, was at the top of the list. The favored pair decided to call it quits after ten years of marriage. For a while, it seemed that their love story would be a rare success in Hollywood but sadly it wasn't meant to be. The two have stated they will remain friends and focus on raising their son, Jack, together.

It's never easy having to fill a legend's shoes, and for Gal Gadot it was even harder. The actress was faced with severe criticism when it was announced that she would portray the iconic Wonder Woman, in Batman v. Superman: Dawn of the Justice League. Gadot, who also starred in Fast and the Furious, proved the critics wrong and blew audiences away with her stellar performance. Though Dawn of the Justice League didn't get the best reviews, the 32-year-old beauty was the true hero of the film, and the same could be said for the film's sequel, Justice League and her solo film, Wonder Woman. 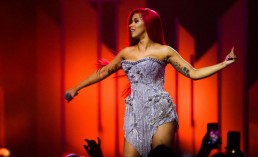