So much cousin love! On Friday, April 13, Kim Kardashian shared a new photo of her 2-year-old son, Saint West, and her 1-year-old niece, Dream Kardashian.

Dream is Kim's brother Rob Kardashian's daughter, whom he shares with Blac Chyna.

In the shot, Saint appears to be hugging Dream as she gazes up at the camera.

The image of Saint and Dream comes hours after the Keeping Up with the Kardashians revealed the reason she decided to delete most of her bikini photos. Earlier this week, Kim and her eldest sister, Kourtney Kardashian, went to Turks and Caicos along with Kourtney's beau, Younes Bendjima, and daughter Penelope Disick.

Following reports that Tristan Thompson allegedly cheated on Khloe Kardashian just days before she gave birth to their daughter, Kim received backlash on social media for her "poor timing." Usually, fans attack the makeup mogul for her raunchy photos, but this time fans felt that she should have been supporting her sister as she was reportedly dealing with the aftermath of Thompson's infidelity. The harrassment led Kim to share a new photo of her and Kourtney as they took a stroll on the beach in their bikinis.

I deleted some vacation pics because I didn’t like the vibe on my page but I re-filtered them and reposting some! I’m crazy about the vibe on my IG page. #PositiveVibesOnly A post shared by  Kim Kardashian West (@kimkardashian) on Apr 13, 2018 at 11:12am PDT

"I deleted some vacation pics because I didn't like the vibe on my page but I re-filtered them and reposting some! I'm crazy about the vibe on my IG page. #PositiveVibesOnly," the 37-year-old reality star captioned the shot.

However, fans will be happy to know that both Kim and Kourtney were right by Khloe's side as she gave birth to her daughter. Their mother, Kris Jenner, and surprisingly -- Thompson, were also present.

Sources close to the Kardashian-Jenner clan claim that they are doing their best to support Khloe as much as possible during this time.

"They're trying their best to keep her emotionally stable. The whole family is beyond pissed at Tristan," the source stated. 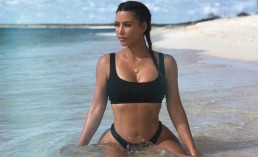