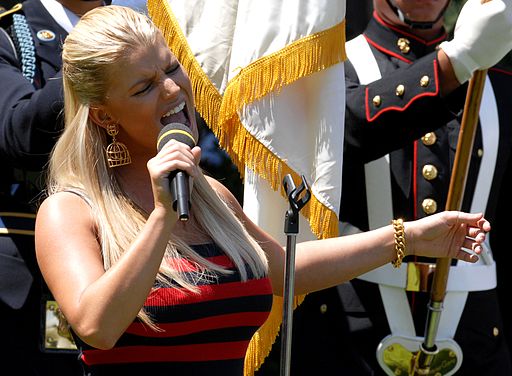 It has been six months since Jessica Simpson gave birth and already, she has lost a whopping 100 pounds!

At 5'3, Simpson admitted that she struggled with her weight of 240 pounds after pregnancy. However, the actress credited her weight loss to the Body Reset Diet -- popularized by Sweetkick founder Harley Pasternak.

Simpson shares three children with husband and former NFL player Eric Johnson. She gave birth  to Baby No. 3 on March 19.

In April she posted a picture of her family of five.

By May, her daughter was two months old and she could start stretching and other light exercises in her rubber corset.

Just stretching it out in my rubber corset. The joy of postpartum pic.twitter.com/9FGrhSM4Gr — Jessica Simpson (@JessicaSimpson) May 9, 2019

Finally, in October, she debuted her new body in a little black dress and shared how happy she is to feel like her old self again.

6 months. 100 pounds down (Yes, I tipped the scales at 240 )
My first trip away from #BIRDIEMAE and emotional for many reasons, but so proud to feel like myself again. Even when it felt impossible, I chose to work harder. pic.twitter.com/2pY7qNFB8U — Jessica Simpson (@JessicaSimpson) September 24, 2019

The next day, she felt confident to go on a night out with the ladies in NYC. She looked dropped-dead gorgeous in a more revealing LBD with a slit.

The mom-of-three has since partnered with Macy's to launch Jessica Simpson Clothing Line.

I am feeling very blessed and inspired getting to shop and work at the same time with @Macys ️ pic.twitter.com/8IPklDLeqy — Jessica Simpson (@JessicaSimpson) September 25, 2019

In a Market Watch report, Simpson revealed that a major factor to her success in business was her fluctuating weight over the years.

"I have been on every size and feel like I understand women and how to dress them," Jessica said.

Gets Help from Khloe Kardashian Trainer

Simpson reportedly turned to longtime trainer Pasternak to help her get back in shape.

Pasternak recently founded a 14-day sugar reset diet with a plant-based mint, which was featured on the E! episode "Revenge Body with Khloe Kardashian." After the said feauture, it sold out nationally, AOL Entertainment reported.

Simpson is convinced it is "the safest thing in the entire world" that binds to sugar receptors in the body. Hence, one cannot taste sugar and thereby reduces sugar cravings.

What She Eats in a Day

Simpson said that she did not want "eating well" to 'feel like a diet' or worse, like a punishment. This is why she liked the Body Reset Diet because it gave her a healthy serving of fiber, healthy fat and protein.

The celebrity mom also raved about how "really simple and doable" the diet was. Simpson got the "Body Reset Diet Cookbook: 150 Recipes To Power Your Metabolism," and she liked how she was treated to a variety of foods -- not wanting to eat the same thing every day.

On the diet, she could have three meals plus two snacks. Choices included scrambles, sandwiches, and stir fry as well as healthy soups and salads. It also included a treat that Simpson loves: an apple pie smoothie!