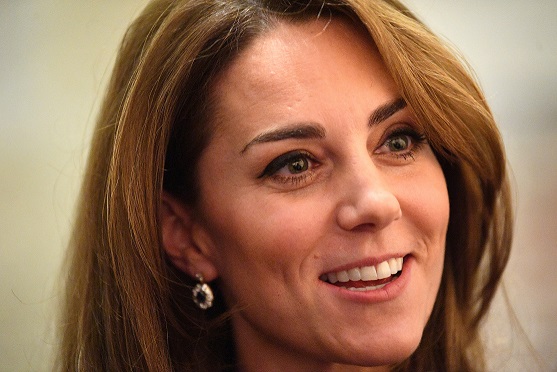 Kate Middleton is looking as regal as ever. She has always got the perfect set of accessories in her jewelry box to compliment her beautiful smile.

This time, she was wearing one of her mother-in-law's precious pieces that completed her dark blue ensemble.

Prince William and Kate Middleton were once again in attendance to support the launch of an organization that focuses on proper responses to disasters that hit the U.K. Kate, 37, was wearing an Emilia Wickstead belted dress paired with Jimmy Choo pumps for the occasion. Both have been her go-to designer dress and shoes.

Her hair, as usual, was worn loose in her signature blowout. When Kate casually tucked her hair behind her ears, royal fans then noticed her wearing the diamond and sapphire earrings that once belonged to her husband's mother, Princess Diana. Although the one Diana wore was a double sapphire drop, Kate made this piece her own by opting to use just one of the blue jewels.

The Duchess of Cambridge has been seen wearing the same pair multiple times since she married into the royal family in 2011. The sapphire earrings always went well with her diamond engagement ring. Both pieces were originally owned by Princess Diana.

Prince William and Prince Harry were able to inherit their mother's extensive jewelry collection. Though very little of it has been seen by the public, now that both are married, their wives will get to use these jewelry pieces when going to formal events alongside them .

In their recent outing, Kate Middleton was wearing a poppy brooch to symbolize Remembrance Day. The poppy brooch was Kate's Women of the First World War. Each of the brooches came with a certificate commemorating the life of the women who lost as a result of the first World War.

Both Kate Middleton and Meghan Markle are handed over the freedom to use Princess Diana's jewelry pieces to their heart's content. Yet both women have remained gracious and simple. Such characteristics are an embodiment of Princess Diana's true beauty.