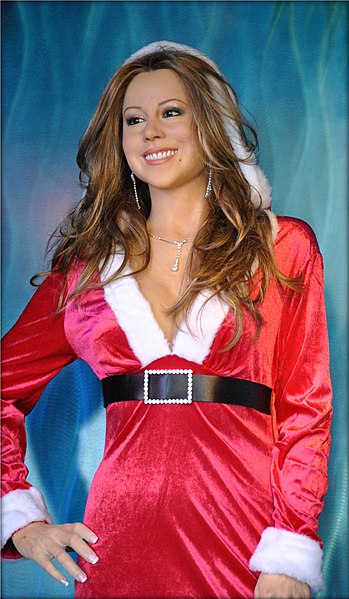 On the 25th year since the first release of her Christmas hit song "All I Want For Christmas Is You," Mariah Carey proves she still got it.

The 49-year old American songstress -- the undisputed Queen of Christmas -- looked beautiful as ever in her Walkers crisps ad.

The advertisement opens with Mariah using her high-pitched singing voice to take a bag of crisps from an elf. Following the shoot -- set on the scene of a music video -- the hitmaker walks through the set and gave everyone in the staff presents. It included a painting of herself riding a magical unicorn with a box full of doves.

Yet, Mariah finds herself with a dilemma as part of the storyline. Both she and a Christmas elf reached for the last bag of chips in the hamper. It is the last piece and they both had their hands on it.

The elf told her it was the last bag. To which she simply replied, "I saw them first."

Following the polite confrontation, Mariah sings her signature high notes to make the elf drop the bag, so she could keep it for herself.

Feeling kind, Carey gives the elf a piece of crisp. Sadly, the act of kindness backfired in an unexpected twist.

Mariah said she loved filming the ad with Walkers. She further admitted that everyone who knew her from her trips to the U.K. could attest how she loved those crisps. She loved festivities and the crisps, so it was a perfect collaboration for her as an artist.

"It's a great way to welcome and celebrate the 25th year of the All I Want For Christmas Is You."

Now, teasers of her behind-the-scenes look for the Christmas Ad is circulating, and Mariah Carey looked perfect.

In an exclusive new photo with the star on the set, Mariah can be seen in the stunning red sequined dress with a plunging neckline that she used in the Walkers ad. The dress was one of Johnny Wujek's creations.

Glamorous as ever, the beautiful voice behind the hit song "Sweetheart" has had her golden locks styled in voluminous waves while two beautiful paintings were beside her. They featured rainbows and unicorns embodying everything that is beautifully magical. It says exactly what Christmas is all about.

The Christmas ad took 150 people in cast and crew to create in a studio in Universal Studios in Los Angeles. It debuted on November 2 in ITV's the X-Factor.

Walkers Head for Marketing, Wayne Newton, said that "Nothing is more Christmassy than Mariah Carey Singing her hit song and our crisps." The new advertisement is definitely a picture of elegance, sophistication and a whole lot of Christmas treats.

READ MORE: All Mariah Carey Wanted For New Year's Eve Was Some Tea