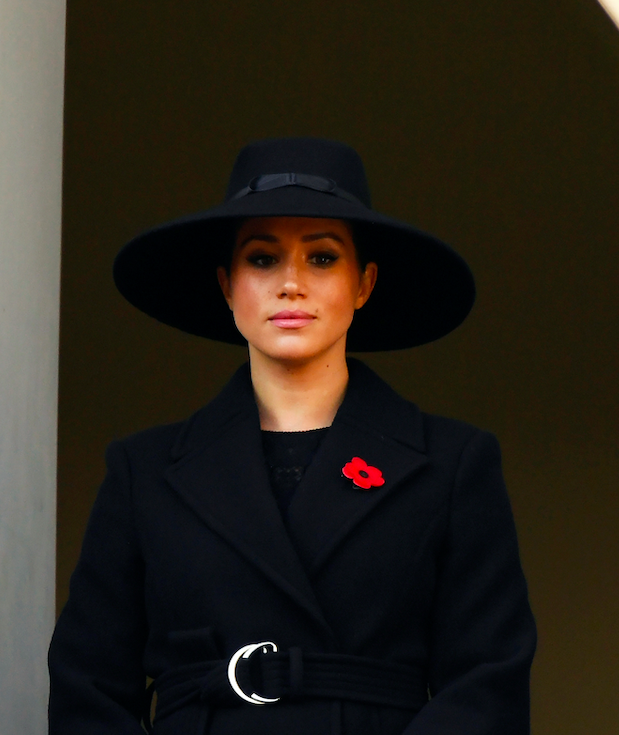 Meghan Markle received heavy backlash for her Remembrance Day outfit after British designer Stella McCartney plugs the coat she wore during the event.

During the Remembrance Sunday commemoration, McCartney posted on Instagram advertising the coat the Meghan Markle wore for the event.

McCartney's caption said, "So honored to have HRH Duchess of Sussex in our Autumn '19 coat at Remembrance Day service. X Stella."

The Duchess of Sussex wore a Stella McCartney belted wool coat worth $2,325 from a balcony at the Cenotaph in Whitehall. She was also wearing a Stephen Jones wide-brim wool hat and Dents cashmere-lined "Helene" black leather gloves.

Social media fans left a string of angry comments on Markle's photo, saying her post was "insensitive," "tacky," and "inappropriate." It was not the right time and day to plug something because it was a day meant to pay respect to those who have given their lives to protect their country.

@StellaMcCartney deleted this IG post due to what I'm calling harassment. While I think that she could've perhaps waited to post about the beautiful coat #Meghan wore, I know that the comments would have been nothing but praises had someone else wore it. #DuchessofSussex pic.twitter.com/q1pNzyDctY — Sussex Daily (@sussexdaily) November 11, 2019

One comment read, "Remembrance Day is to honor those that fought for us."

That using Remembrance Day to advertise clothes is a "little disrespectful" because people died.

Some said she should show some respect and not use the event for advertising purposes.

Another comment said that it is to an appropriate time to be selling the clothes.

"This is extremely tacky."

"I expect better of you, Stella."

McCartney also posted a pic of poppies with the caption, "Remembering the ones that sacrificed to give us freedom. X Stella"

McCartney posted a video beside the Animals in War Memorial in Hyde Park, telling the camera, "I always think this one is the most important memorials in London that recognize the lives of the animals that were sacrificed at war. Because they had no choice."

There are no reports to know if Markle bought the coat herself or if the designer has gifted it to her.

Since coming to British soil, Markle has been sporting a lot of Stella McCartney pieces.

During her wedding in May 2018 with Prince Harry, the Duchess swapped into a McCartney gown for her evening reception at Frogmore House.

The evening dress was a lily-white high neck gown that's made of silk crepe.

That same year, she wore a black Stella McCartney dress for her third official arrival after giving birth to her son, Archie. She also wore McCartney creations for the Queen's 92nd birthday party and the Invictus Games Opening Ceremony.

Meghan Markle will be criticized even further, associating with the likes of Paul McCartney's daughter.