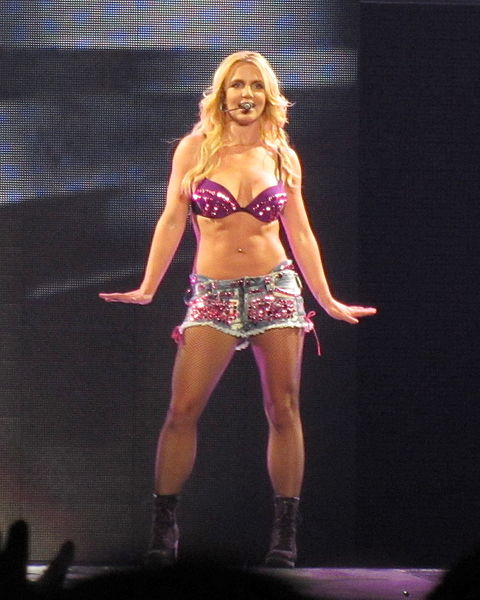 The new year may just have started, but Britney Spears is already making everyone envious of her toned body.

Spears flaunted her physique with her new snakeskin-print triangle bikini (paired with a choker!), posting the sizzling photo on Instagram. She captioned her photo, saying "Can't wait for spring!" along with a string of emojis like a polka dot bikini, a butterfly, and a star to name a few.

In the Instagram snaps that the singer shared, Spears can be seen wearing a snakeskin-print triangle bikini top with matching bottoms. She accessorized it with a white lace choker necklace. The 38-year-old singer also wore her long blonde hair in voluminous yet loose waves while sporting her trademark look of heavy black smokey eye makeup.

In the comments section of the post, the "Toxic" singer received supportive messages from her fans. One of her fans left a comment saying that Britney always serves it up. Another one also commented and called Britney the queen. The Instagram user said that "Queen never forgetting her eyeshadow and choker."

Britney has always been known for her trendy clothes and dark eye makeup, becoming one of the most-admire artists when it comes to fashion-forward outfits. Her post came just days after Spears shared her fitness goals for 2020.

In the video she posted last week, she gave her audience an idea of how she goes about her Yoga practice. In the video, Britney can be seen wearing a sleek purple string bikini and a pair of rubber shoes. She was doing a number of Yoga poses while in the outdoors.

Whether it is doing Yoga or going for a swim, Britney's toned body is perfect for the fashionable woman that she is.

Although several users also left negative comments on her post, Britney did not let them get to her. Some said that the Yoga she showed on the video did not look like Yoga at all, but the singer continued to show off what she has been practicing to help open up her chest and back.

The mother of two was also joined by her dogs in the outdoors.

View this post on Instagram
In 2020 I will be doing a lot more acro yoga and the basics for yoga …. I’m a beginner and it’s kind of hard to let go …. learning to trust and letting someone else hold your body !!! I have a lot of things I keep bottled up so I have to keep my body moving !!!! Thank God for Mother Nature …. she’s really no joke …. she grounds me and helps me find my feet and always opens my mind when I step outside …. !!!! I was lucky today with this beautiful weather ️ I just flew in from a trip with my family and I ran a 6.8 speed outside my house for a 100 meter yard dash ... I did 6 in high school so I’m trying to gain speed !!!! I hurt my thigh so I apologize if my legs look swollen . I hope you all have a wonderful new year and GOD SPEED !!!!! PS I’m so cool with my tennis shoes and yoga ‍️ it’s the new thing you know !!!! A post shared by  Britney Spears (@britneyspears) on Jan 2, 2020 at 3:09pm PST

The singer also declared that the year 2020 would be all about acro yoga and learning the basics of yoga as a practice of meditation.

In the caption of her video, she explained that she is all new to it and it is kind of hard to let go. However, she said that she is determined to learn to trust and let someone else hold her body. The singer admitted that she had a lot of emotions bottled up, which is why she needed to get her body to move.

Apart from doing Yoga, Britney also opened up about engaging in running, too. She shared that during the trip she took with her family, she ran at a 6.8 speed outside her house in a 100-meter dash. She also revealed that she used to run when she was in high school and she intends to make it more often now.

Because she knew some people would comment on her bikini and tennis shoe combination, the singer jokingly said that she thought it was the new "in" thing in fitness fashion.

Britney Spears is trying to turn herself around to be healthier and happier. Whether it is doing yoga or running in a bikini or what, the singer is determined to make her life so much better.