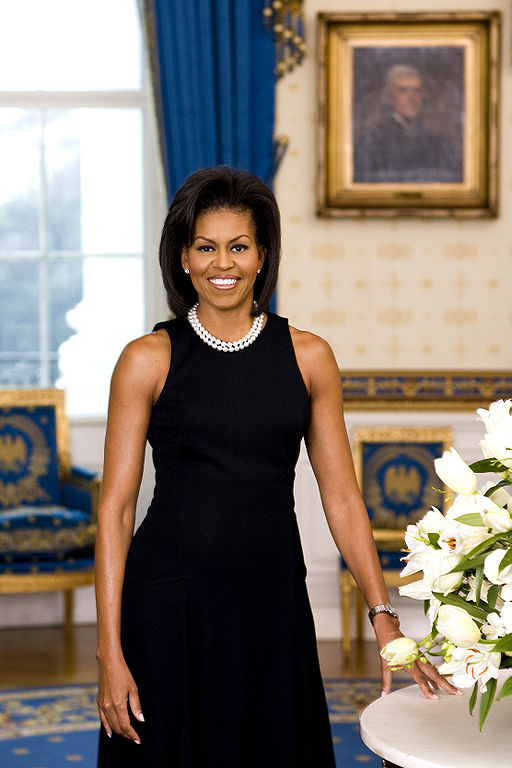 Michelle Obama gets a clean start with her exercise regimen -- starting with her music playlist. The former first lady knows the importance of tunes to boost her mood during workouts.

Obama revealed the grooves she listens to when she goes through her toughest workouts. The 56-year-old lawyer is well-known for her toned body which she flaunts in shift dresses (like in the photo above).

As the New Year came, Obama highlighted her mission towards prioritizing self-care. She revealed how challenging it can be to stick to New Year's resolutions, so she shared her go-to playlist in hopes to inspire her followers to stay on track with their fitness goals.

The "Becoming" author made it a point to clean-up her playlist as well. This is a good idea for detoxifying the soul and the body.

Millenials will feel a certain nostalgia when playing her workout tunes, which are now curated on Spotify. Obama's feel-good music for exercising include the 90s hit "Feels Good" by Tony Toni Toné and Destiny's Child's "Lose My Breath" from 2004.

The former first lady's family-friendly workout music also includes soul-cleansing tunes like "A God Like You" and "Godspeed." The entire playlist boasts a wide genre spanning from R&B music to Jamaican, AfroWave and rap.

Working Out to The Tunes of Friends

Michelle tapped into the music of friends like Beyoncé, Lizzo and Cardi B. Michelle and Beyonce's friendship was evident during her time as first lady.

On her playlist, Obama went for Beyoncé's "Before I Let Go" and Lizzo's "Soulmate." As for Cardi B, Obama goes for the clean version of "Press."

Other edited songs that she chose to workout to are Jay Z and Kanye West's "Clique," The Carters' "Apesh*t" and Anderson. Paak's "Come Down."

Obama also went for the latest tunes to keep her workout playlist fresh and up-to-date. Her clean music of choice included Ariana Grande's "Rule the World" with 2 Chainz. She then grabs her dumbbells to Jennifer Lopez's "Feelin' So Good Remix."

From the guy musicians, she chose Bruno Mars and his hit songs "Perm" and "Finesse" with Cardi B. Michelle also showed she is a fan of the English singer Ed Sheeran, choosing songs like "Cross Me."

The top tune that got the most comments from Obama's followers was "South of the Border" which Ed Sheeran did with Camila Cabello and Cardi B.

Michelle wrapped up her workout routine and her playlist with mood-boosting tracks like Tiana Major 9 & Earthgang's "Collide." She also has Alicia Keys' "Show Me Love" and Meek Mill's "24/7" to keep her going throughout the day post-workout.

Check out her full playlist below:

It's about that time when New Year's resolutions get a bit harder to stick to. To offer a little inspiration, I want to share my go-to #WorkoutPlaylist with you. These songs always seem to give me that extra boost to get through my toughest workouts. What's on your playlist? pic.twitter.com/GFP56Yi9A6 — Michelle Obama (@MichelleObama) January 19, 2020

Michelle's husband, the former president Barack Obama, earlier posted his workout playlist as well. He did not mind searching for clean versions of songs.

The former president revealed songs from Beyonce, Lizzo, Lil Nas X, and Bruce Springsteen as his top choices for working out and long drives.