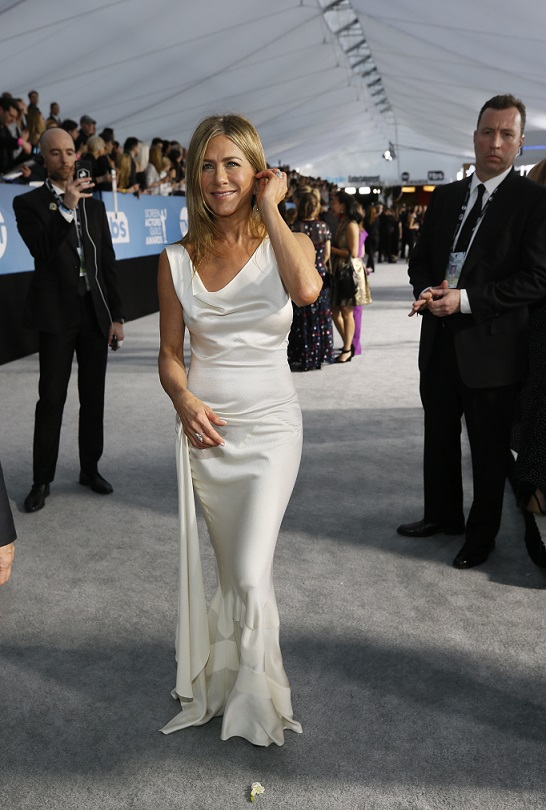 Brad Pitt and Jennifer Aniston's reunion at the SAG Awards was caught on camera. However, while the two seemed happy and full of sparks, one person reportedly is not.

According to reports, Pitt's ex-wife Angelina Jolie is fuming over the photos of the two and allegedly wants to take a bitter revenge to her ex-husband.

Is She Over Him?

Jolie might take drastic actions to give herself the last laugh, sources said. "She's outraged by how Brad Pitt is smearing their friendship with a bit more affection," and insider told Globe (via New Idea).

As noted by the said source, Angelina could not help but think that her ex-husband is deliberately doing it "to yank her chain." The "Mr. and Mrs. Smith" actor allegedly knew that "Maleficent" actress would be watching and how she would react after seeing such sweet gestures.

"Seeing Jen touch Brad in that familiar way and his response in kind, confirms her suspicions Jen's been after Brad in a big way and that he's more than open to the possibility!" the source added.

The insider also said that Angelina is furious about the treatment she has been getting from Hollywood. It seems as if everyone is rejoicing that she and Brad split up. Moreover, for her, people enjoying the Brad-Jenn reunion felt like celebrating her downfall.

Brad and Angelina are going through a rough divorce settlement, particularly because they do not agree about their children's custody. After two years of marriage and 12 years together, the ex-couple decided to file for divorce.

They have been declared legally single again last year while their divorce talks are still in the works.

Sources told Life and Style that Angelina might hit back at Brad by demanding millions for their divorce settlement. At the moment, the two are talking about the custody of their five underage children. Their eldest, who turned 18, already chose to be with his mother before he left for Korea to pursue his college education.

"It is not good for Brad when Angelina is angry. It's either she does something to get what she wants or she would do everything to make his life miserable," the insider told the publication.

They added that everyone has warned Brad Pitt of what could happen, especially when Jennifer Aniston and Angelina Jolie are involved.

Will They Ever Move On?

Jolie and Pitt are no longer a couple. However, he still plays a huge role in her life and the life of her children. And although the two are trying to move on from their past, it seems as if the people around keep pitting them against each other.

Are Jennifer Aniston and Brad Pitt ever getting back together? The future has yet to reveal itself. At the moment, their fans revel at the sight of their favorite couple getting comfortable around each other. It is more than enough to see that there is still that familiarity with each other for these ex-lovers.

Is the "Tomb Raider" star affected by the reunion of Brad and Jennifer? Only she can really tell. Jolie is currently on travel and she has not responded to the rumors.

READ MORE: Brad Pitt, Jennifer Aniston Want Only THIS One Thing For Each Other